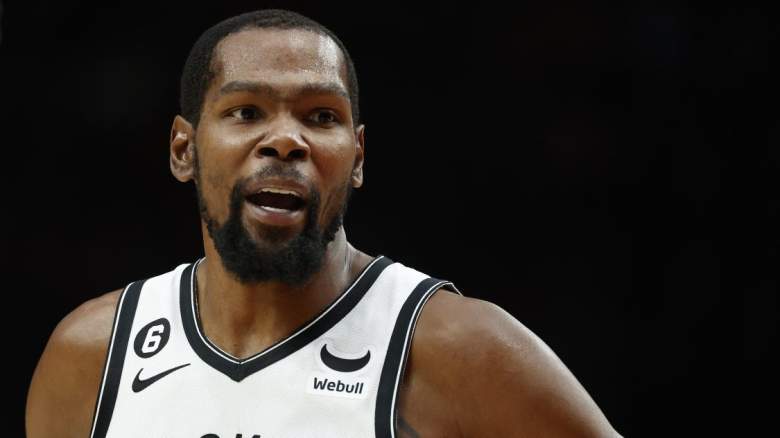 When the Philadelphia 76ers welcomed the Brooklyn Nets to the City of Brotherly Love this week, the stakes were more than win or lose. No, it was Ben Simmons’ first game back in Philadelphia after sitting out all of last season and the acrimonious end to his Sixers career.

But beyond that, it was an opportunity for Sixers fans to see one of the greatest players in NBA history: Kevin Durant. The forward is on an MVP rift so far this season, single-handedly keeping a scandal-plagued Nets team in contention. And as usual, Sixers fans couldn’t help but taunt Durant from the sidelines. But Durant, not backing down, handed the trash talk right back.

“I can’t hear your drunk ass” Durant chirped on the fan.

Durant’s speech is particularly bold considering Durant could become a Sixer in the not-too-distant future.

According to Heavy Sports insider Sean Deveney, the Sixers almost certainly inquired about Durant at a time when the Nets are once again facing a mountain of internal and external scrutiny.

“There is no doubt that the Sixers asked about Durant, they did over the summer, and they will continue to ask about him,” an Eastern Conference executive told Deveney. “But the Nets are going to be a little put off by them over the Ben Simmons thing because they feel like they gave James Harden away all this time. So once the Sixers burned them, the Nets want to go back and say, OK, sure, we’ll do a KD deal too.

However, the question remains whether Durant has enough skin to make it in Philadelphia. After losing to the Sixers this week, he dropped his own take on the Sixers fans’ treatment of Ben Simmons.

Durant knew the stakes in the Sixers game.

“It’s a lot of emotions, a lot of you just want to play well.” Durant told reporters. “You know the fans are going to get in on it and be excited, not excited but doing their best. It’s the same for every arena. Everyone wants to see our team fail, nobody likes Ben [Simmons]nobody likes Ky [Kyrie Irving], nobody likes me so it could be in any street arena, you know what I’m saying? So it’s just something we have to deal with. I thought he did a great job just handling it and playing his game and we had a chance to win but we just didn’t.”

Whether Durant can truly claim the “Nobody Likes Us” card is debatable. After all, the NBA world is rightfully upset with Irving after he circulated an anti-Semitic video on social media and Simmons showed a general reluctance to fulfill his astronomical potential.

It must be cold comfort for the Sixers to watch the Nets struggle. Finally, the end of the Simmons trade wasn’t all for the Sixers either, as James Harden continues to miss time through injury.