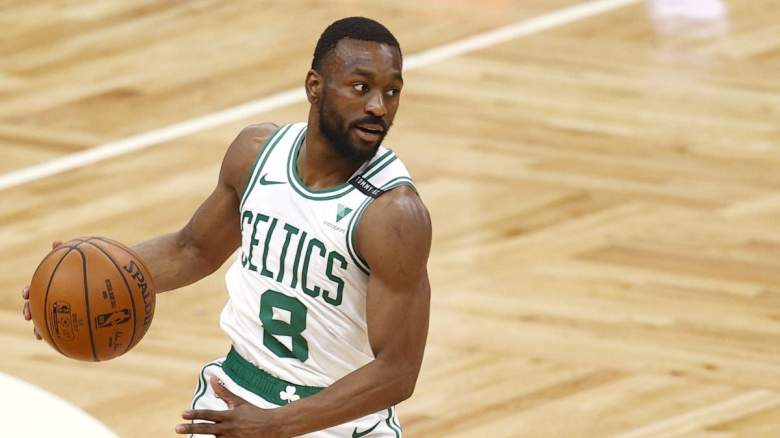 Former Boston Celtics guard Kemba Walker has remained a free agent since the Detroit Pistons waived him before the start of the season. Walker last played for the New York Knicks last season, but he may not be on the open market much longer as teams watch what they do and don’t do.

A Western Conference executive named Walker as a possible target for the Golden State Warriors while speaking with Heavy Sports’ Sean Deveney about their options.

“There are point guards if they wanted to take a risk, a kemba walker in a pinch. There are boys out there. They just have to figure out what their red line is when they pull the trigger on one of these guys.”

The Warriors bench has taken a step back this season after losing Gary Payton II, Otto Porter Jr. and Nemanja Bjelica in the offseason. As of Nov. 22, their bench has the league’s worst net rating as they step onto the court at minus 7.9 points per 100 possessions as a unit.

Last season, Walker averaged 11.6 points, 3.5 assists and three rebounds per game in 37 games with the Knicks while averaging 25.6 minutes.

Los Angeles Clippers guard John Wall expressed disappointment that veterans like Walker aren’t currently playing in the NBA because he believes they can help young teams.

“I think it’s kind of frustrating for a lot of the great veterans that we have in this league because a lot of those guys are getting ousted,” Wall said. “We have so many great guys like Melo, Dwight … even Kemba Walker … They need experienced guys who help these young teams as much as possible, give them some kind of guidance and teach them what’s going on.”

Walker joined the NBA a year after Wall’s freshman year in the league. Walker and Wall were divisional rivals when they played each other during their stints with the Charlotte Hornets and Washington Wizards, respectively, from 2011-2019.

Despite not belonging to any NBA team, Walker will still make big bucks throughout the 2022-23 season. According to Spotrac, Walker will earn $27,431,078 with the Oklahoma City Thunder and $9,165,471 with the Pistons. Adding all of that together, Walker will make $36,596,549 while not currently playing for a team.

While being interviewed by ESPN’s Adrian Wojnarowski on “The Woj Pod” on Nov. 12, Walker shared what he told Jayson Tatum and Jaylen Brown when many questioned their match.

“They’ve always seen the talks and everyone has said they can’t play together, but … I’ve always told them, ‘This organization is literally going nowhere without you two.’ My main thing about these guys was that they had to love each other… Jayson and Jaylen, you two have to come together as best you can and lead this team to this promised land. They have nowhere to go without these two guys.”

Walker then spoke about how good the two were and how proud he was of his former teammates.