Kadarius Toney reacts to the Giants Trade Report on Instagram 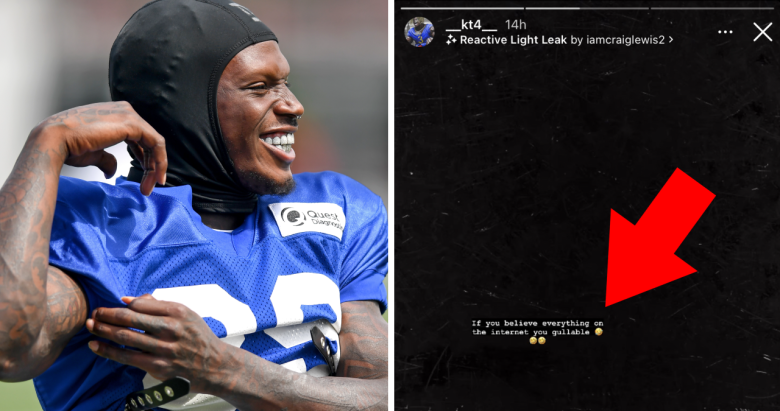 Much has been said about New York Giants wide receiver Kadarius Toney in the past week, and it’s difficult to determine how much of it is accurate. The conversation began when he failed to report for minicamp volunteer practice on Wednesday and reached a high point on Friday night when Pat Leonard of the New York Daily News reported that the Giants are shopping Toney on the trading block.

Shortly after the trade report was released, Toney himself added to the conversation. He posted a short message on his Instagram story which can be seen below.

“If you believe everything on the internet, you are gullible [sic]’ Toney wrote.

This news sounds like Toney is downplaying the possibility of a trade. That assessment is consistent with recent New York Post reporting that the Giants are listening to offers from other teams but a trade remains “unlikely.”

Earlier this offseason at the NFL Scouting Combine, Giants general manager Joe Schoen was asked about the possibility of trading Toney. His mind may have changed since then, but he didn’t sound keen on deferring the former first-round pick at the time.

“I don’t think Kadarius is a tradable piece,” Schoen told the New York Post. “Again, if someone calls, we will listen. But he’s a good young player who our coaches like very much. We are in constant contact with him and are excited to see what he can achieve.”

It’s important to remember that Schoen didn’t design Toney, it did former general manager Dave Gettleman. The current regime is still trying to figure out which of Gettleman’s remains are worth building on, and that’s a fluid assessment when it comes to Toney.

If Toney had attended minicamp this week, these trade rumors probably wouldn’t have been circulating. Or at least Toney would have the opportunity to address her in person and not on social media — as star running back Saquon Barkley did this week.

Instead, the stage is set for a summer of wide-receiver drama in New York.

And that’s not exactly a new development…

The wide-receiver drama seems to be following the New York Giants no matter what they do these days. Maybe it’s a curse brought on by the infamous Boat Trip, but there’s a definite trend with this team and this particular positional group.

You could even go back further and explore this topic in more depth. Former Giants wide receivers Hakeem Nicks and Victor Cruz were never “crabs” in the locker room, but the way their respective careers have been curtailed by injuries is indicative of the team’s unlucky position. Then there was Plaxico Burress, whose time with the Giants came to an end when he literally shot himself in the leg.

You’d have to go all the way back to Amani Toomer to find a Giants wide receiver who was consistently productive, rarely got injured and never made a negative impact in the locker room. And Toomer last played for the team in 2008.

Even if the Giants trade Toney, they probably won’t get much in return.

Ralph Vacchiano of SNY estimates the Giants could at best get a third-round draft pick.

Considering the Giants gave Toney a first-round pick last season and got just 420 yards (and zero touchdowns) from him as a rookie, such a trade would be a huge flop. New York would be much better off sticking with Toney and seeing what they can get out of him in Year 2.

You’d have to go all the way back to Amani Toomer to find a Giants wide receiver who was consistently productive, rarely got injured and never made a negative impact in the locker room. And Toomer last played for the team in 2008.