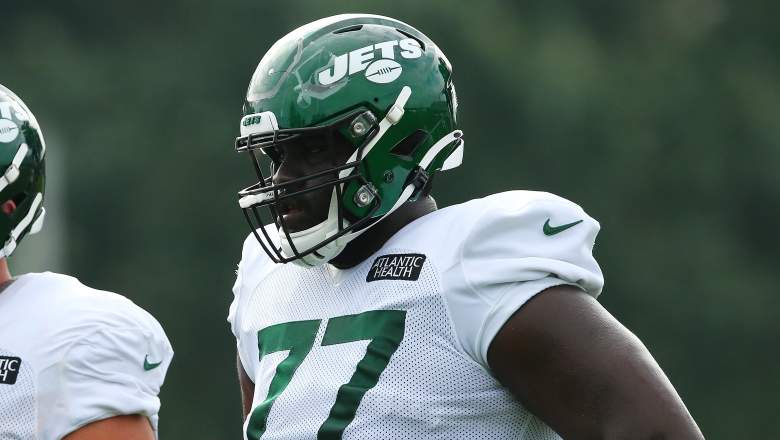 After Week 18 officially ended the New York Jets’ 2021 season, many players addressed the media one last time in a sort of exit interview.

Most press conferences were pretty standard. Rising stars commenting on their development, upcoming free agents showing they would like to return to Florham Park and team leaders preaching a bright future under Robert Saleh.

Those kinds of talks don’t exactly make waves, but one veteran made a few puzzling remarks when asked if Mekhi Becton would fulfill his potential.

The Jets have been very quiet on the subject of Becton all year, but there was an earlier blip. After the 2020 first-rounder struggled to adjust to the new pass protection system in training camp, offensive coordinator Mike LaFleur made the mistake of being overly open with the media.

“Mekhi is going through some things right now,” LaFleur said on Aug. 19. “He’s not playing at his best and he knows it.”

Becton later responded that he was “confused” by his OC’s comments on the matter, attributing his rusty preseason game to missing OTAs with a foot condition. This week, it’s possible that another member of the Jets organization inadvertently leaked some behind-the-scenes information.

During his year-end press conference, right tackle Morgan Moses was asked what Becton can do to “realize his potential as a left tackle.” I don’t know about you, but his answer made me look twice a bit:

Rewind that, did Moses say “change his mindset”? Most veteran players and coaches are very good at answering questions diplomatically, and Moses is no different. His answer when asked if he would be returning to New York in 2022 was a perfect example.

However, on rare occasions a player or coach will be asked about something they weren’t expecting, and sometimes even the smallest of comments can be the most telling. Why would Becton change his mindset, according to an eight-year NFL veteran who hasn’t missed a game since his 2014 rookie season?

It’s what a psychoanalyst would call a Freudian slip, and while I’m sure Moses didn’t mean anything by it, that one line certainly roused me from the doldrums of normal conversation on exit calls.

The mountainous left tackle has become one of the most polarizing figures in this new Jets core. He was Joe Douglas’ first draft pick for the job and some believed Becton was the wrong choice from day one with Tristan Wirfs on the board – who had just completed his first Pro Bowl campaign of 2021.

Becton, on the other hand, posted a total of 48 offensive snaps before suffering a season-ending injury due to various inaccuracies or setbacks in his recovery period. The truth is that nobody outside of the organization knows why the Louisville product never returned, but many have their theories.

For example, we’ve mentioned in the past that Pro Football Network’s Tony Pauline reported that the Jets’ coaching staff were fed up with Becton’s work ethic. However, Douglas has continued to support the disappointing talent, both publicly and reportedly.

During GM’s season-ending press conference, he noted that the franchise wants Becton “back on the field” and that the OT itself wants the same.

Douglas continued: “I think he’s attacking this off-season and coming back in the best possible form that he can be [is key], and I expect great things from him in the next year… We all want Mekhi back.”

The Jets GM also told reporters that Becton’s injury delays in 2021 “not really anyone’s fault and it wasn’t Mekhi’s fault” or the doctor’s fault, either. His explanation was that since left tackle is “a bigger man” the “process got longer than [the Jets] originally thought.”

Regardless of who is to blame for the blocker not staying on the field, the facts are the facts. Becton was a first-round pick in 2020. Since joining Gang Green, he’s only factored in 15 out of a possible 33 games with the team – and he’s left a few of those appearances early.

When he’s on the field, he’s proven to be a legitimate force in the running game and above-average pass protection. Becton was charged with seven sacks and 25 quarterback pressures on 443 pass-blocking snaps. That’s 0.016 bags and 0.056 presses per snap.

However, the left tackle’s career will likely always depend on his availability, and no social media guarantee can change Jets fans’ minds. The only way to win back the mob is to prove it on the gridiron.

Follow @obermüller_nyj and @BoyGreen25 on twitter for all the news New York Jets Breaking news, rumours, new takes and more!

For example, we’ve mentioned in the past that Pro Football Network’s Tony Pauline reported that the Jets’ coaching staff were fed up with Becton’s work ethic. However, Douglas has continued to support the disappointing talent, both publicly and reportedly.