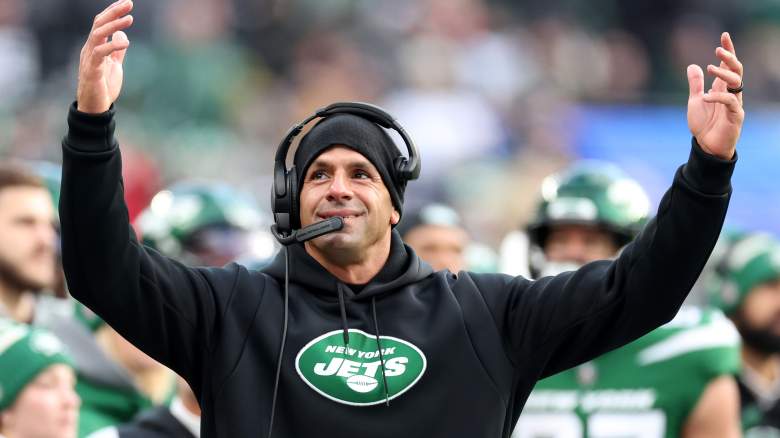 The New York Jets have two crucial decisions to make in 2023, and head coach Robert Saleh says they could end up being a match.

During a Jan. 12 press conference following the split from offensive coordinator Mike LaFleur, Saleh confirmed that the new OC will “absolutely” have a say in quarterback picks. That comment fueled countless speculations about which potentially available QB OC tag team might make the most sense, and very few offer the track record of close friends Aaron Rodgers and Nathaniel Hackett.

The Green Bay Packers’ legendary signal caller has a resume that speaks for itself. He is a four-time NFL MVP (winning in 2020 and 2021 back-to-back) as well as a Super Bowl MVP who has led his franchise to five NFC Championship games.

Hackett has had an awkward season with the Denver Broncos, but don’t let that distract you from his wealth of experience as an OC with a resume spanning eight seasons and three NFL organizations. He has coordinated a top-five offense twice in his career — once with Rodgers and the Packers and a second time with Blake Bortles and the Jacksonville Jaguars — and a top-15 offense in four of eight OC campaigns.

Most notably, he has close ties to Rodgers and Saleh, who was on the coaching staff of Doug Marrone in Jacksonville alongside Hackett in 2016.

Rodgers is currently reconsidering his future, but assuming he decides to lace it up in 2023, many in the league believe the Packers could be looking to trade the veteran for a number of reasons.

“I haven’t had any concerns over the past few years that Aaron might retire or be traded,” John Kuhn — a former Packers fullback and Rodgers teammate for nine straight seasons — told Heavy on NFL insider Matt Lombardo. “I would say now that I feel like everything is on the table.”

The Ringer’s Danny Heifetz also wrote a lengthy and descriptive article detailing why the Jets should trade all-in on Rodgers this offseason. The NFL writer hypothesized that this would cost the Jets first- and second-round picks in 2023.

“If the Packers bring Rodgers back for 2023, it would actually be a two-year commitment,” Heifetz explained. “Last offseason, Green Bay signed Rodgers to a mammoth contract extension: essentially a $150 million, three-season deal that pays Rodgers an average of $50 million a year. Because of the unique way Rodgers’ contract is structured, he would almost certainly be untradable next offseason (the Packers would have to take an unsustainable $68 million dead cap hit to get the money working). ).

Given the state of their franchise and Jordan Love’s rookie contract — which is entering its final year ahead of a potential fifth-year option — Heifetz concluded it would be wise for Green Bay to trade Rodgers at this moment .

“If you’re looking for a team with a Super Bowl-caliber supporting cast that’s an experienced quarterback who’s remote from the competition, look no further [than the Jets]’ Heifetz commented later in the piece. “As Jets fans know well from the Rex Ryan-Mark Sanchez teams that won back-to-back AFC championships in the winters of 2010 and 2011, a young elite defense can dominate, but it can also quickly disappear. The question is not if the Jets will add an experienced QB; it is when. Neither Zach Wilson nor White are good enough to trust them with a Super Bowl run.”

Heifetz went on to argue that Rodgers was, calling QB options like Jimmy Garoppolo and Derek Carr “uninteresting half-measures.” He concluded, “If the Jets are going into the next offseason as a true Super Bowl contender and not just an improved team, there is an obvious move on the table for them. [Rodgers].”

We know all about the coaching connections and friendships that bind Hackett and Rodgers to the Jets. Saleh’s aforementioned days in Jacksonville, Packers HC Matt LaFleur, who served as NYJ head coach’s best man, Mike LaFleur’s previous tenure in New York.

This feels like one of those situations where there are either too many factors bridging that attitude, or the perfect amount.

The Athletic’s NYJ Beat reporter Zack Rosenblatt tied the same dots and named Hackett a potential candidate for the offensive coordinator position. “He became the object of ridicule, fired in less than a season in Denver. But before that, he was a highly respected offensive coordinator for the Packers,” Rosenblatt said. “He was also the OC for the Jaguars from 2016-2018 and before that Jacksonville’s QBs coach. He and Saleh were on the same staff in Jacksonville.”

Peter Bukowski, the host of the “Locked on Packers” podcast, also fed this opportunity to Twitter. “If we’re going to get conspiratorial, how about the Packers convincing the Jets to let Mike LaFleur come to Green Bay as part of Aaron Rodgers’ trade negotiations,” Bukowski suggested. “Then the Jets hire 12-guy Nathaniel Hackett as OC and a trade is made.”

What’s the saying again? This is so crazy, it might just work.

When he heard the news that Hackett was fired from the Broncos, Rodgers opposite The Pat McAfee Show that “Hack is still getting paid and he still has an incredible wife and family and lots of things to be proud of.” Adding: “And he still has a great friend in me.”

Yes, so crazy that it could work.

Peter Bukowski, the host of the “Locked on Packers” podcast, also fed this opportunity to Twitter. “If we’re going to get conspiratorial, how about the Packers convincing the Jets to let Mike LaFleur come to Green Bay as part of Aaron Rodgers’ trade negotiations,” Bukowski suggested. “Then the Jets hire 12-guy Nathaniel Hackett as OC and a trade is made.”