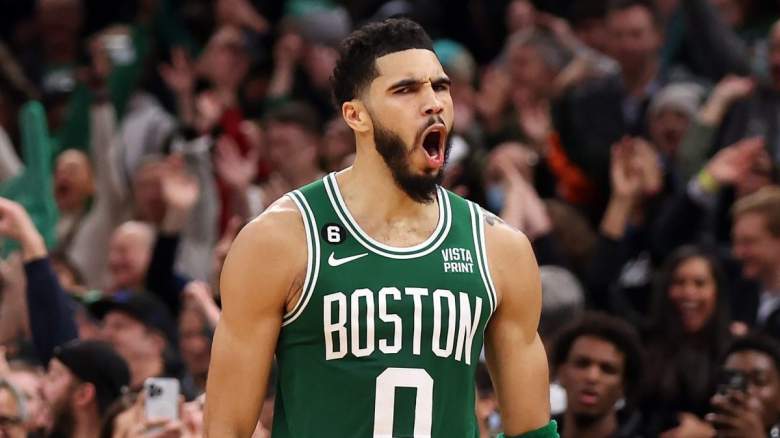 On Thursday night, the Boston Celtics picked up one of their most important wins of the season, defeating the Golden State Warriors. After losing to them in the finals last year and again earlier this season, they finally exacted some kind of revenge.

However, the victory was not easy. Golden State was in control for most of the night, but a late-game surge helped the Celtics push the game into overtime, where they took home the win. The next morning, Jayson Tatum made sure to show some love to the Celtics fans.

“☘️s fans I really rock with y’all lol I hope the feeling is mutual 🤝🤞🏽…last night was a great time” Tatum tweeted.

TD Garden was loud for the game as it was the only time Golden State was in Boston this year. The first time the two teams have faced each other this season was in San Francisco, where the Warriors have had a much better track record so far this year.

Tatum struggled a bit with his shot, but he ended the night with some extremely impressive stats. He finished with 34 points, a career-high 19 rebounds, six assists and three steals on 9-of-27 shots from the field and 4-of-13 shots from behind the three-point line.

On top of that, Tatum took on a huge workload against Golden State. He played a career-high 48:07 and led the game in total minutes. Tatum came back into play early in the second quarter and played the entire second quarter, third quarter, fourth quarter and overtime without a break.

But his contributions have all paid off as Boston exorcised some demons from last year’s Finals by beating Golden State.

Tatum led the Celtics in points, rebounds and minutes, but as mentioned, his shot feel wasn’t quite there. And on top of that, Jaylen Brown was struggling a bit too. In turn, big man Al Horford rose, dropping 20 points and 10 rebounds.

After the game, Tatum praised Horford and jokingly questioned his actual age.

“I was joking with Al. He came out looking like he was 25 today,” Tatum said via CLNS Media. “Two days off, I said he needs two more days in a row because he came out and set the tone, he really did. And we all chased it the rest of the night.”

Despite his shooting problems throughout the game, Brown got into the clutch against the Warriors. In the end, near the end of regular time, he hit the winning shot that sent Boston into overtime. After the game, Warriors head coach Steve Kerr spoke about the defensive breakdown that led to Brown’s three.