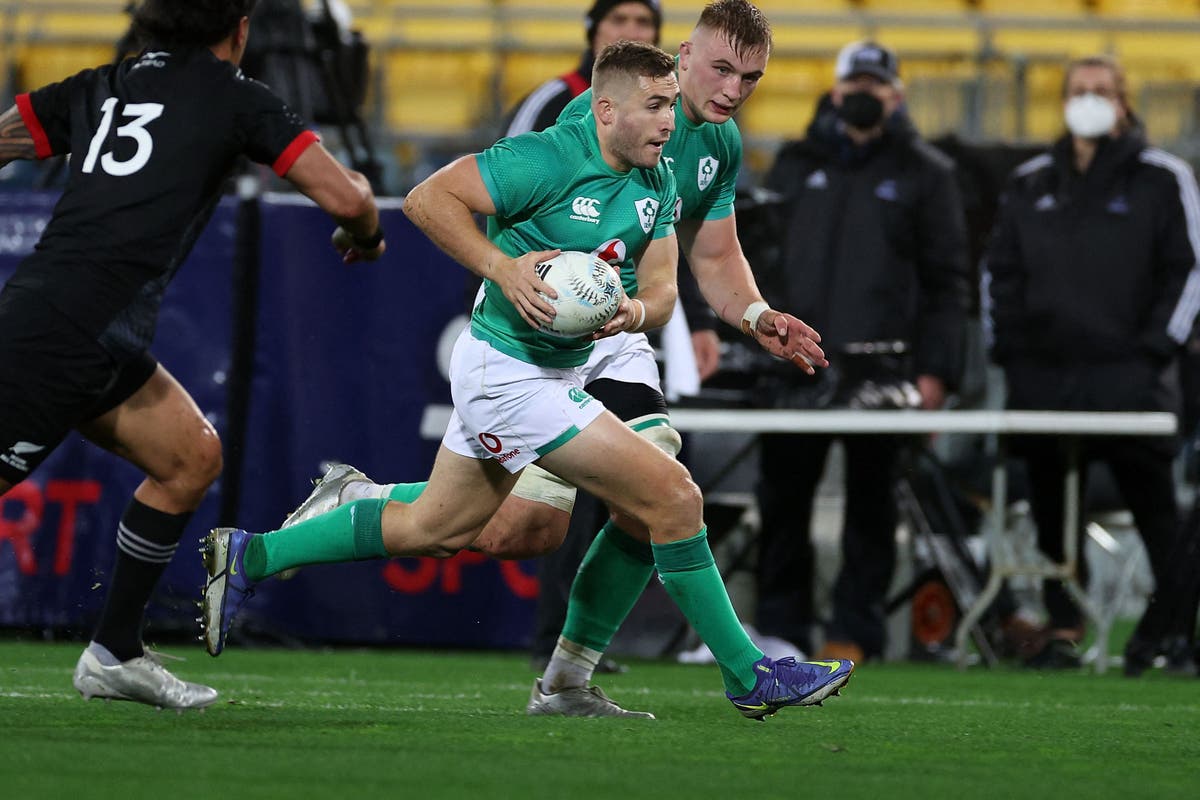 Ireland kept their momentum ahead of Saturday’s thrilling decider against New Zealand after a second-tier line-up impressively defeated the Maori All Blacks 30-24.

Andy Farrell’s side will complete their Test trilogy against the All Blacks at Sky Stadium in Wellington and were given an early glimpse of the venue on Tuesday.

While older players watched from the stands, their understudy fought back after a sloppy start as two tries from Jordan Larmour and goals from Nick Timoney and Gavin Coombes helped avenge the loss to the Maoris in the tour’s opening game.

Only a handful of the inexperienced 23 players present are likely to feature at the weekend, but the result gives Farrell’s men a further boost after their historic first away win against the Kiwis three days ago.

Rookie fly-half Ciaran Frawley scored 10 points on a soggy, windy evening in the capital that saw Cian Prendergast and Larmour spending time in the guildbox.

Shaun Stevenson – who scored one of four Maori goals in the first encounter – gave the hosts an early lead before a second-half penalty attempt and a superb Ruben Love goal kept them in contention before Brad Weber scored the late consolation.

Ireland were led by Test veteran Keith Earls on a team that showed three personnel changes from the experimental side, which was dismantled by the Maoris in Hamilton just under two weeks ago.

The visitors came under pressure from the start with a series of errors, culminating in winger Stevenson diving into the corner after a quick right-to-left ball within three minutes.

Earls lined up alongside Stuart McCloskey in a newly formed midfield and used his 97 cap experience to quickly bring his side back into contention with a fine dose of opportunism.

After the Maoris threw a pass wide, the 34-year-old Munster player caught the opposition with a quick out-line that allowed Larmour to swish free and land under the post.

Frawley added the easy conversion and later landed a penalty to put the Irish 10-5 ahead.

Both sides were then reduced to 14 men during an ambiguous six-minute period, with Ireland flanker Cian Prendergast falling for failure to retreat and Maori prop Ollie Norris soon following after coming in from the side.

Norris’ exit came shortly after Coombes was held up under heavy Irish pressure, but Timoney was undeniable as he swerved in turn after the resulting penalty.

Another three points from Frawley extended the lead early in the second period before the momentum shifted in the Maori’s favour.

Ireland might have some grievances about the decision but perhaps felt aggravated that New Zealand escaped the same penalty at the weekend when prop Ofa Tu’ungafasi was only given a yellow card for illegally stopping Garry Ringrose.

The Irish weathered the storm during Larmour’s absence and excelled in the collapse, with Timoney particularly impressive, before reasserting their authority.

Munster rear rower Coombes made up for his first-half disappointment by rolling well over the target down the left flank to put his side 25-12 ahead with the final 10 minutes.

Ireland had little time to enjoy the healthy lead as Maori substitute Love ripped through their defense with a terrific run before touching down after recovering the ball from Cullen Grace.

Josh Ioane was unable to put any further pressure on the Irish as he went wide again with an erratic conversion before the Maoris were forced to end the match a man down after Stevenson over an intentional break in the had fallen.

Any hopes of a comeback were dashed with two minutes remaining when Larmour crossed wide down the right before Maori substitute scrum-half Weber made the goal-line more respectable after the death.