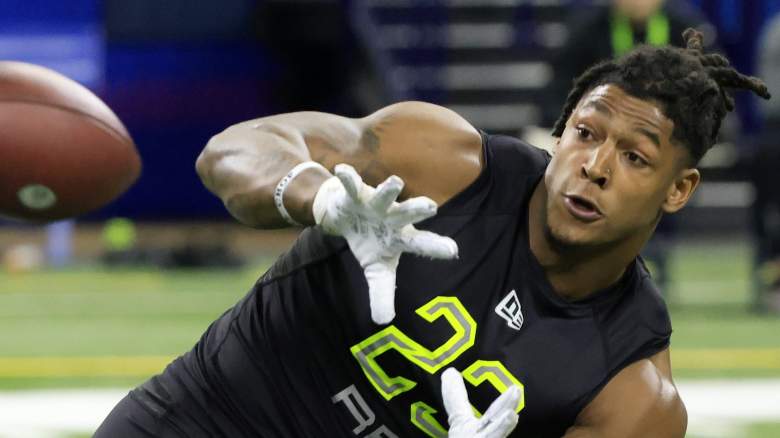 The Kansas City Chiefs went into camp this summer with a loaded backfield.

The returns of Clyde Edwards-Helaire, Jerick McKinnon and Derrick Gore were paired with the additions of Ronald Jones II and undrafted rookies Jerrion Ealy and Tayon Fleet-Davis. But there’s also another undrafted rookie who caused quite a stir in training camp, so much so that he’s drawing comparisons to a former Chiefs running back and reputation on the field.

“Isiah Pacheco, a Rutgers seventh-round pick, looks like a real player – 216lbs, 4.3 speed and characteristics that remind staff here of former Chief Kareem Hunt (except he may have extra gear that Hunt didn’t have )” wrote Sports Illustrated NFL insider Albert Breer on Aug. 3.

“He’s a product of what HR saw as an excess of Day 3 running backs in this year’s draft class, which was due to the 2020 COVID season putting work on people who may have entered the 21st class has taken away. And Pacheco is more than just a character type — he’s also shown real vision. So it will be interesting to see how he fits into a crowded backfield with Clyde Edwards-Helaire, Ronald Jones and Jerick McKinnon.”

Breer does a training camp tour of the NFL, so what he saw of Pacheco was from just one day. However, on-site reporters for each day of camp even draw comparisons, as Breer did.

While it can be very difficult to get Pacheco’s hands on the ball early in the season, there is another way he will touch the ball for the Chiefs: special teams.

Speaking to the media at training camp, special teams coordinator David Toub revealed that Pacheco will get his first try at being the team’s primary kick returner, a job previously held by former Chiefs wide receiver Byron Pringle was exercised.

“We’re going to start him as the guy and see if he can handle it,” Toub said of Pacheco on Aug. 2. “See how he’s doing preseason. In a few games, we’ll know right away. He’s promising. He’s a big guy – 215 plus. ran [a] 4:37 [40-yard dash]. It’s kinda scary back there if we can get this thing to work. We used Pringle like this. We believe we can achieve that with Pacheco.”

Kansas City’s veteran running back Jerick McKinnon, the oldest running back on the roster, had a lot of good things to say about Pacheco when asked about him.

“He’s a humble guy and his work ethic is top notch,” McKinnon said of Pacheco on July 30. “He’s really explosive and a nice size. Him and Fleet [Tayon Fleet-Davis] both, great backs but they move really well. You have good footwork in each exercise. I know the coaches think a lot of them and so does everyone else in the team.”

McKinnon also shared some of the advice he gave to Pacheco and some other younger players.

“He’s shown what he can do with the ball over the past few days,” McKinnon continued. “Like I told him and the other guys, if you come in as a rookie it’s going to be a big learning curve. Right now everything is flying. It’s a bit slower in OTAs and you learn with the trainer and they break it up. As soon as you arrive at the warehouse, all the cylinders are there. It has been amazing to watch these guys learn and come out and progress every day.