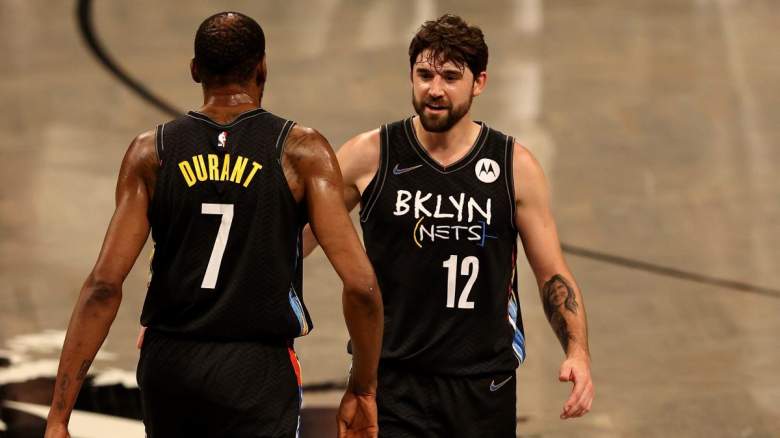 The Brooklyn Nets roster is starting to look complete. They received welcome news that their two superstars, Kevin Durant and Kyrie Irving, will return to Brooklyn this season, even after a summer when that seemed impossible. You’ll also see the return of two injured stars in Joe Harris and Ben Simmons. Each of these players joins newly acquired TJ Warren, Royce O’Neale and Edmund Sumner, as well as non-guaranteed deals like Markieff Morris, Yuta Watanabe and David Duke Jr.

After adding off-season players and those returning from injury, the team has quite an extensive roster. Irving, Patty Mills and Cam Thomas round out the point guard position. Seth Curry, Joe Harris, Sumner and Thomas are options on the shooting guard. Harris, O’Neale, Durant, Warren and Morris make up the possible forwards. Ben Simmons is expected to run down the middle, and Nic Claxton and Day’Ron Sharpe are options there as well. But what will the Nets’ starting lineup look like?

In a Sept. 20 article by The Athletic, Joe Vardon wrote that Joe Harris is expected to be part of the Nets’ second unit. After discussing a number of things the Nets may face this season, Vardon shared that Harris will be coming off the bench for the Nets.

“Joe Harris’ surgically repaired ankle has healed. The best 3-pointer in the league will come off the bench.” Vardon wrote.

With the revelation that Harris will be part of Brooklyn’s second unit, the Nets’ starting rotation has a little more clarity. Kyrie Irving is likely to start as point guard, Seth Curry as shooting guard, Kevin Durant as small forward, Royce O’Neale as Bruce Brown, and Ben Simmons to be the team’s starting center.

This can of course change. Nic Claxton and O’Neale could be switched in their starting roles, but either way the Nets’ starting lineup is dangerous. Then Brooklyn has a dangerous second unit with the additions of a scoring forward in TJ Warren, shooting from Patty Mills and Joe Harris and possibly Markieff Morris and Cam Thomas.

While the answer to who starts, Curry or Harris, was revealed by Vardon, either one could still be traded and both have been mentioned by name in this summer’s trade rumours. An NBA exec told Heavy.com that he expects one to be dealt by Curry or Harris at some point this season.

“One of them [Curry or Harris] will be dealt with before the deadline, I would assume. Both are really good shooters, that’s obviously their skill. But both are poor defenders who will be targeted in the playoffs. Obviously finding a new home for both boys this summer wasn’t a priority for them so, no, they haven’t really talked about a deal for either boy yet.

But I suspect they’re going to want to come out and see how healthy Harris is, see if he’s gotten back to his old form, and then they can start figuring out what they can get for him versus what they can get for can get curry. Harris has more value if he can show he’s healthy – he’s not as bad a defender as Curry. If they try to get a deep playoff run, Harris is more likely to stay who they would keep,” the manager told Heavy.