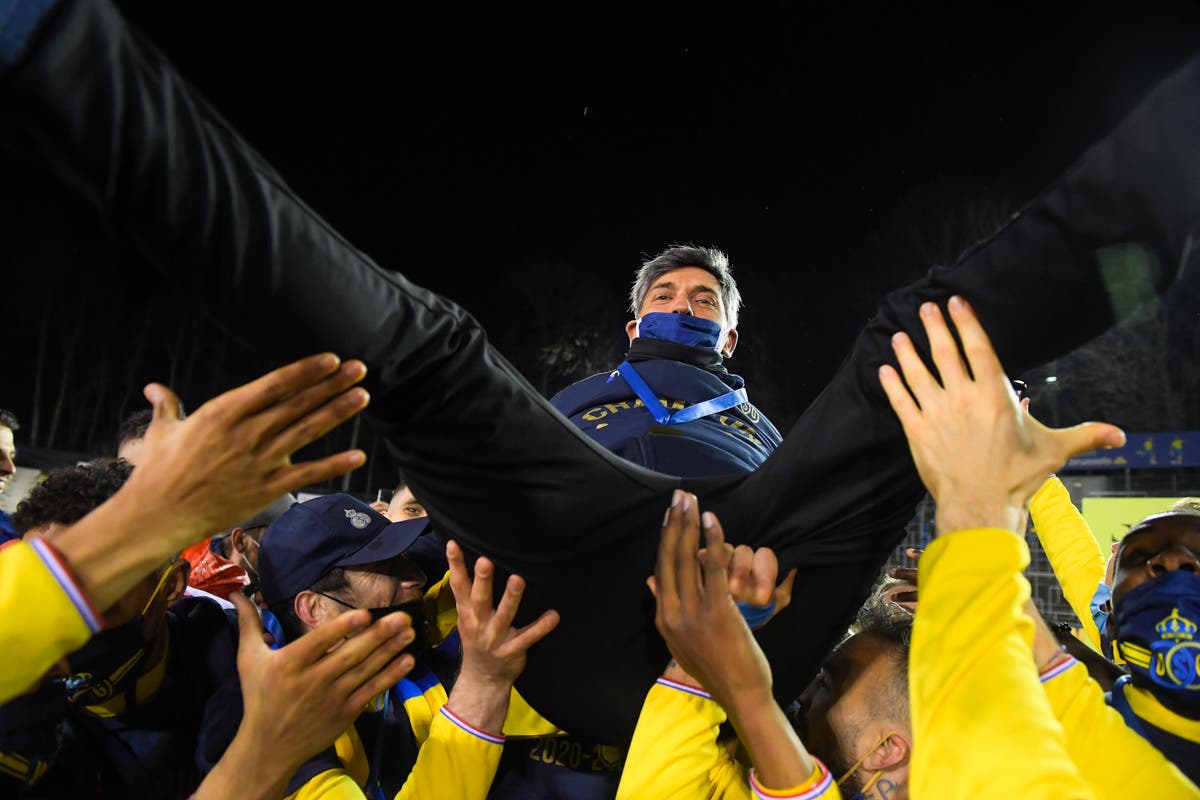 In the south-west of Brussels is Anderlecht’s unmistakable lottery park, home of the Belgian football aristocracy: 34 championship titles, nine trophies, five European cups. Anderlecht wears purple, the color of the Belgian monarchy, and was in the top six every year since World War II until the last season.

On the other side of the canal, in the corner of a picturesque park, there is a stadium in stark contrast: the Stade Joseph Marien, home of the Union Saint-Gilloise. It’s a place that you could easily miss from the street, behind a centuries-old brick facade that hides a handful of doors. Inside there is a relic of a bygone era, where exposed terraces are interrupted by grass hills and on autumn days like these the few plastic seats are filled with leaves from the surrounding forest.

The old square has space for 8,000, and Union has recently started selling every ticket. Last season they finally returned to the top division for the first time in 48 years; now they are front runners in the Belgian Pro League, four points ahead of Antwerp and Bruges, 10 ahead of Anderlecht, which they beat on a noisy opening day. Fans are equally speechless and delirious. It’s just beginning, but this could be a season of Leicester-like proportions.

Three years ago Union was bought by Tony Bloom, owner of Brighton & Hove Albion, and his business partner Alex Muzio. In many ways it was a marriage of convenience – Bloom and Muzio were intensely looking for a European club, but they had a very narrow mission: easily accessible from London, relatively cheap, growth potential, an accommodating fan base and most importantly, to acquire it for sale. This contract excluded most of Europe, as did their lofty ambitions. “One of the reasons we didn’t buy in France, Italy or Spain was because we wanted to win,” says Muzio The independent one. “It wasn’t just about finding values. That should be fun. “

They let themselves be put off by a Dutch club with its connections to hooliganism and finally came across a small second division team in a chic Brussels district, whose German owner was ready to sell and whose fans were enthusiastic again. Union Saint-Gilloise had a rich history with eleven league titles – the third most in Belgian history – but their last triumph came in 1935, and they had spent the last half a century in the minor leagues. “At Union you had the feeling that everyone wanted the takeover to take place,” says Muzio. “This was a chance to revive something.”

Unlike in Brighton, majority shareholder Bloom stepped into the background, and it was Muzio, then 34 years old, who took over day-to-day operations as Union’s new chairman. They injected money and upgraded the training facility, but it wasn’t money to transform and Muzio admits they made some mistakes. They did not succeed for a while. Playing in the second division of Belgian football is not a lucrative endeavor; Money spent is money lost by the time you reach the Pro League, and every passing season of no promotion has been a painful blow.

Recruiting would be key, starting at the top. In the second attempt, Muzio found the right sports director in Northern Ireland, Chris O’Loughlin, whose varied résumé included positions in the DR Congo and the Belgian manager Sint-Truiden. He also appointed Belgian chairman Philippe Bormans, and the young leadership trio – Muzio is now 37, O’Loughlin 43 and Bormans 34 – adhered to a set of core principles that gradually bore fruit.

First and foremost was a meticulous transfer policy that was data-driven and sealed into the character of a player through detailed reports in order to identify personalities who fit the club. Nothing happened on a whim; each signing has typically been a 10 month process (they are already working on goals for next summer regardless of whether the team qualifies for the Champions League which would double revenue by five) starting with the request of the Managers, filtered through performance metrics and budget constraints, before doing detailed background checks, scouring social media and taking references from former coaches and teammates. “It sounds a bit intense, but it’s supposed to make sure they’re good guys,” says Muzio. Referencing the New Zealand All Blacks’ famous “No Dickheads” mantra, he believes that a similar approach was key to fostering a strong bond between players.

New signings came from near and far, a group of mercenaries who were looking for a fresh start and who were convinced of the club’s vision. Captain Teddy Teuma is a Maltese international who has spent most of his career in the French non-league. Right-back Bart Nieuwkoop was a rare coup by Dutch giant Feyenoord after Union quickly courted him.

Then there was star striker Dante Vanzeir, a youth product at one of the largest Belgian clubs, Genk, who was looking for playing time. “He was 22,” says Muzio, “and he had the chance to stay in the top league and move to smaller teams without great ambitions or to fall to us and play for a coach he knew.” [former Genk coach Felice Mazzu], a team that showed him ambition, a really top training ground, and that’s what he chose. ”This week Vanzeir celebrated his first international match for Belgium – days before a viral video showed how the entire Union squad announced the announcement of its international team The convocation party celebrated, danced and sang as if they had won a trophy.

Scouting has focused on the underrated corners of the European game, especially the minor leagues where Muzio believes there is a certain amount of snobbery that should be exploited. Defender Christian Burgess, one of three English players now at Union, is a prime example. When his contract in Portsmouth expired, the giant center-back had told his agent to look for opportunities abroad when Union happened to call a few weeks later.

Union had identified him based on his physical presence and ball skills that matched their style of play, and they were impressed with the historian’s unusual journey through the game. It took Burgess a bit of persuasion to play on archaic ground in Belgium’s second division, but Sporting Director O’Laughlin was convincing. “It was a leap of faith,” admits the 30-year-old Burgess. “But the way Chris talked about it, I had to judge him as a person and he was honest and I believed what he said was true and they would fulfill their ambition.”

On the pitch, Burgess found a team of selfless players who gave everything for each other. “There aren’t a lot of egos,” he says. “I think we haven’t been beaten for the running statistics once this season. The guys in midfield are running insane numbers and they’re reaping the benefits, but it’s for everyone else too. We competed against big teams that probably don’t have the team spirit that we have. “

Off the pitch, fans have welcomed him and his family and friends when they came to visit, heard a rare foreign voice among a largely local fan base, and wanted to know more. Burgess is enrolled in French courses at the University of Antwerp, although the dressing room, under the guidance of veteran manager Felice Mazzu, speaks mostly English. This was another area that admits it took Muzio some time to get it right, but their third head coach was an instant hit and popular with the players. “Felice is very practical in training,” says Burgess. “He has plans for every game, so we do a lot of in-depth video analysis. He’s a great character who’s always kidding, but he can also be wild. “

Players like Burgess now have the chance to prove themselves in the top division after promotion. From League One to a shot in the Champions League, he certainly has no regrets. “[In England] To be honest, it never crossed my mind to play in the Champions League. The plan to come here was to move up to the top division and who knows, maybe in a few years I could get lucky and play in the Europa League. There is still a long way to go, we will reconsider it at halftime, but of course the goal this season was to just stay up there. “

Bloom and Muzio have big ambitions, for example moving the Antwerp training ground closer to the Brussels stadium, but there are some things they cannot change even if they wanted to. The stadium is a listed building, so no walls can be torn down or wrought iron gates replaced. You cannot build a roof on the open stands, as this would block the view from the highest point in the park – even the view is protected. Union has hired a full-time sustainability officer who deals with their environment and helps them become more responsible owners.

All of these quirks make Union feel that they are better suited for non-league than Champions League, but they are also features that make the club unique, such as the stained glass window inside the stadium that shows the yellow and blue crest of Union wears. “We are just the custodians of the club,” says Muzio. “At the moment it can’t, but we want it to stand on its own two feet long after we leave.”

In its heyday in the 1920s, Union fans made fun of Anderlecht and called their neighbors “the elevator” because they kept coming up and down the top row – then Union fell so deep into the shaft that they didn’t even go Justified ridicule. Now the little club on the other side of the canal is relevant again. A national newspaper recently listed the three coolest things in Belgium: “Tesla, Bitcoin and Union,” it said. Muzio felt this enthusiasm firsthand: he always wears the Union colors with pride, and where his weekly trip to Brussels used to be under the radar, he was recently stopped while walking through the train station. “Sometimes they know that I am the chairman, often not, but they just want to talk about Union.”

Whatever happens this season, Union is undoubtedly a force again in Belgian football. For so long, Stade Joseph Marien was little more than a monument to past glories. Now it’s the present and the future looks bright. Brussels is a two-club city again.