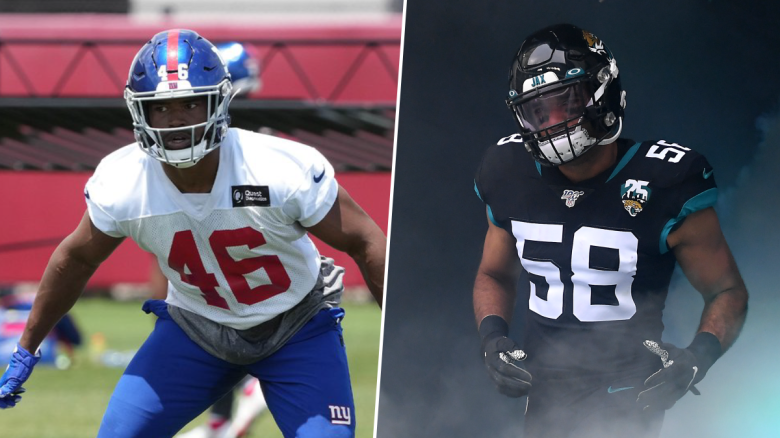 The New York Giants replaced a linebacker who can’t play in Week 1 with one who can.

On Thursday, the Giants announced the release of suspended linebacker Justin Hilliard and the signing of free-agent linebacker Austin Calitro.

Earlier this offseason, Hilliard was suspended for two games for violating the NFL’s no-performance-enhancing drug policy. Hilliard, who appeared in just two games with the Giants last season, released a statement on Twitter at the time of his suspension.

“I have been informed by the NFL that I have tested positive for a banned diuretic – spironolactone (Canrenone).” Hilliard wrote on Twitter on June 17. “After the investigation, it became clear that I had mistakenly taken my partner’s prescription medication instead of my own anti-inflammatory medication. I understand the NFL’s zero tolerance policy and take full responsibility for having a prohibited substance in my system.”

Hilliard will have to serve out his two-game ban regardless of where he goes next, but Calitro will be ready to play from day one. Calitro most recently played for the AFC champion Cincinnati Bengals, appearing in five games and recording six tackles (four solo). . However, he did not appear in any of Cincinnati’s postseason games.

Calitro, 28, joined the NFL in 2017 as an undrafted free agent from Villanova and bounced around between teams before ending up with the Seattle Seahawks in 2018. He played in all 16 games (five starts) for the Seahawks this season, recording a career-high 45 tackles, a pass defended, plus a half-sack.

Calitro has qualified for a different team every year since this season. He started four of the 13 games he appeared in with the Jacksonville Jaguars in 2019, but was a reserve/special team player with the Denver Broncos in 2020 and with the Bengals in 2021.

Now that the Giants are in training camp, Calitro brings some quality depth to the linebacker unit.

Under defensive coordinator Wink Martindale, the Giants will field a 3-4 base defense. While Hilliard’s suspension certainly played a role in his release, NFL Network’s Mike Garafolo also notes that Hilliard was not an ideal fit for Martindale’s defense.

You can see the impact Martindale’s plan is having on staff if you look closely at the roster/depth chart. First-round rookie Kayvon Thibodeaux, for example, is listed as an outside linebacker. At Oregon, he was listed as a defensive end. There’s virtually no difference between these two positions when it comes to edging the passer off the edge, but Thibodeaux may work more often with a two-point stance and have slightly different responsibilities in run defense as well as occasional pass coverage duties.

The other big difference is on the line. The Giants currently have nine players listed as DL/DE/DT on their roster, and only three of them weigh under 300 pounds. Defensive linemen in Martindale’s 3-4 scheme tend to be larger guys who are able to eat up space, rushing the edge to the much lighter outside linebackers.

“He allows players to be in positions where they can be successful,” Martinez said of SNY Giants. “He trusts his guys to go out there and he gives a lot of freedom to maneuver and communicate as a defence.”

Martinez, 28, is currently recovering from a cruciate ligament tear and plans to be an anchor at linebacker for the Giants this season.

Martinez, 28, is currently recovering from a cruciate ligament tear and plans to be an anchor at linebacker for the Giants this season.