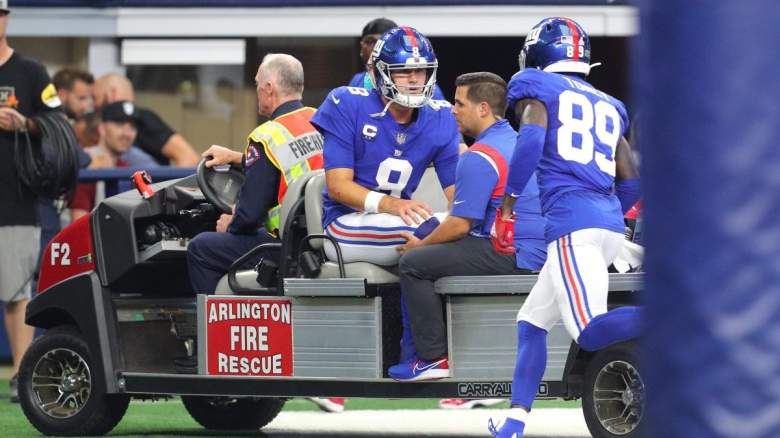 Despite a concussion on Sunday October 3rd against the Dallas Cowboys, New York Giants quarterback Daniel Jones appears to be leaning towards week 6.

Jones participated in non-contact exercises during training on Thursday, October 14, wearing his signature red jersey and throwing passports at his recipients.

This is a bit of a surprise given that Jones is moving faster than expected. Although it looked like he was missing out on Sunday’s match against the Los Angeles Rams, one Beat writer believes he’ll be active based on the progress he’s made during the week.

As Zack Rosenblatt of NJ.com tweeted this afternoon, he would be “surprised” if Jones didn’t play along.

Corresponding Ryan Dunleavy of The New York Post, this is also the “fastest” he has seen to go through the concussion log, which is a promising sign.

Head coach Joe Judge was asked by reporters about Jones’ chances of playing this week, to which he replied, “At this point everything looks positive.”

But not so soon, while things are looking good in terms of Jones’ likelihood of facing the Rams, there are a few more obstacles for him to overcome.

The final step for Jones is to have an independent outside neurologist work out because Art Stapleton from The Bergen Record written down.

While the Giants seem optimistic about Jones’ status, they can’t offer much more as the final decision will be left to an outside party.

If Jones can’t leave, Mike Glennon will make his first start since Week 16 of 2020 with the Jacksonville Jaguars. Glennon took over for Jones late in the first half against the Cowboys on Sunday, going 16 of 25 for 196 yards, with one touchdown pass and two interceptions.

Glennon’s last win as starting quarterback in the NFL came back in Week 3 of the 2017 season.

While the Giants won’t start this week with running back from Saquon Barkley (ankle sprain) and No. 1 wide receiver Kenny Golladay (knee), they could get two other vital weapons back into their line-up.

Wideouts Sterling Shepard and Darius Slayton have both missed their last two games with hamstring injuries. Fortunately, they seem to be about to return home.

According to head coach Joe Judge, he is “optimistic” that the duo can play the Rams on Sunday.

Shepard is one of Jones’ favorite targets, especially in third place. In the first three weeks of the season, Shepard scored 18 receptions for 223 yards and one touchdown.

As for Slayton, while he has become one of Jones’s best deep-ball connections, he does struggle with drops at times. Prior to his injury, Slayton had seven catches for 127 yards and one touchdown.

The Giants are expected to have safety Jabrill Peppers again this week.

Peppers missed his team’s competition against the cowboys with a hamstring injury. But as Pat Leonard reported of The New York Daily News on Wednesday October 13th, Peppers stepped out of the practice field and told General Manager Dave Gettleman that he was healthy and ready to go.

This bodes well for the Giants after their defenses were slashed by the Cowboys in Week 5.

On the other side of the ball, the status of left tackle Andrew Thomas is still unknown. Thomas has a foot injury and even though he played against Dallas, he didn’t take a snapshot.

Thomas and left guard Matt Skura (knee) both worked on the side on Wednesday and took part in the open part of the training on Thursday. However, Thomas’ workload still appeared to be light, per Dan Duggan of The Athletic.

Without Thomas, Nate Solder started with the left tackle while Matt Peart slipped in on the right against Dallas. Peart was seen doing reps on the left tackle during Thursday’s practice, which could indicate a position flip against the Rams.

As for Slayton, despite having become one of Jones’ best deep ball connections, he does struggle with drops at times. Prior to his injury, Slayton had seven catches for 127 yards and one touchdown.