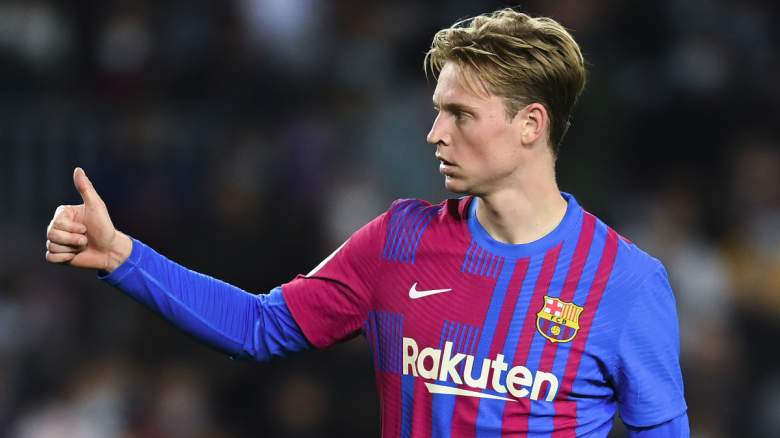 The midfielder was asked about the 33-year-old after playing for the Netherlands in their 2-2 Nations League draw against Poland on Saturday 11 June. De Jong made it clear that he would like to play with the attacker, as reported by Fabrizio Romano.

However, it’s still not clear if either player will play at Barcelona next season. De Jong faces an uncertain future amid speculation Manchester United are keen to bring him to Old Trafford ahead of the 2022-23 season.

The Dutchman was also asked by ESPN if he was ready to trade Barcelona’s beaches for the ‘Manchester cold’, the Mirror reported, and responded with a laugh before adding: ‘No, I can’t, I can’t say anything.”

De Jong has previously downplayed talk of a move to the Premier League, saying he prefers to stay at Barcelona as it is his dream to play for the Catalan giants.

Lewandowski has already admitted he won’t sign a new contract with Bayern and wants to leave, but sporting director Hasan Salihamidzic has again hinted that the club expects the striker to see his current contract, as reported by Mundo Deportivo.

“Lewandowski has a contract until 2023 and we are very happy that he is here. I think things will settle down now,” he said. “We know what we have with him and he knows what he has here. We’ve discussed his public statements and we should all calm down.”

However, Bayern could be ready to let Lewandowski go if they can bring in a backup attacker first. Salihamidzic admitted that Bayern are looking for new strikers.

Liverpool striker Sadio Mane has emerged as an option. Bayern are ‘getting closer’ to a deal for the Senegalese international and expect to agree personal terms soon Romano.

Meanwhile, speculation about De Jong’s future continues as manager Xavi has already admitted the midfielder could be sold amid the Catalans’ ongoing financial woes.

However, Barcelona vice-president for finance Eduard Romeu has hinted that the club has no departures planned, meaning all departures are said to be for footballing reasons ESPNis Sam Marsden.

He explained: “We have not budgeted a single euro for player sales, all exits would be technical (decisions).”

Romeu’s words stand in stark contrast to Xavi’s comments, while president Joan Laporta told Catalunya Radio if the club’s financial plans work out “there will be no sales for financial reasons”.