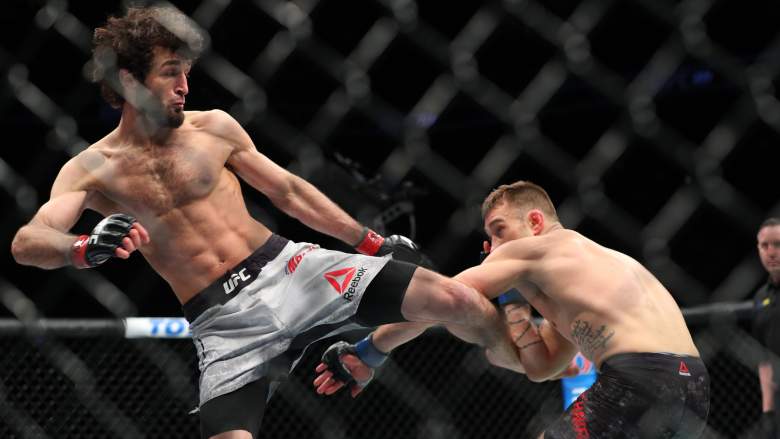 A UFC featherweight contender who once seemed destined for a title has confirmed what many MMA fans feared: he is retiring from fighting. Zabit Magomedsharipov revealed in an Instagram post that he is retiring from the UFC at the age of 31. The Dagestani fighter had not fought in the Octagon since 2019 due to injuries. His retirement was first reported by MMA Fighting on June 15, 2022.

In his retirement announcement posted on Instagram on June 16, Zabit said, “Assalamu alaikum friends! I know many of you have been waiting for my return, there hasn’t been a single day that someone hasn’t asked when my next fight is. But I decided to end my professional sports career. Fight stoppages and then health issues – all of which didn’t allow me to perform/fight earlier. I’ve since recovered, but I don’t feel the way I used to.”

If Magomedsharipov remains retired, he will end his career with a record of 18-1 overall and 6-0 in the UFC’s 145-pound division. His last fight was against Calvin Kattar, who is scheduled to headline the UFC Fight Night card in Austin on June 18. He was supposed to fight Yair Rodriguez in August 2020 but the fight was scrapped because Rodriguez injured his ankle.

Magomedsharipov made his much-anticipated UFC debut in 2017 after fighting in ACB and winning the featherweight championship in the Russian promotion. He picked up victories over Mike Santiago, Sheymon Moraes, Kyle Bochniak, Brandon Davis (who finished him with only the third Suloev stretch submission in UFC history), Jeremy Stephens and Kattar and quickly climbed the rankings. In September 2021, Magomedsharipov’s trainer Mark Henry teased that the Russian star would return, posting: “BEST UFC Featherweight ZA-BEAST! HE IS BACK 👊🏼.” But there was no fight.

Zabit Magomedsharipov hinted that his return to the Octagon might never materialize in an April 2022 Instagram post. The post showed him sitting in front of a laptop at a Doctors of the World clinic in Russia, with the caption: “Soon a new name to appear in the medical world of Makhachkala,” suggesting he might end his fighting career in order to study to become a doctor. Magomedsharipov has not yet commented on his future career plans.

But health issues and the pandemic slowed his rise to the top of the UFC. His manager, Ali Abdelaziz, told MMAJunkie in January 2022 that his client was struggling with health issues but was trying to train for his return. In May 2021, another member of Magomedsharipov’s camp, Rizcan Magomedov, made a statement said Zabit is dealing with “health issues and specifically the immune system.” He also said Magomedsharipov needed an operation to solve his health problems but had to postpone it because of the immune system problems.

Henry, Magomedsharipov’s longtime coach, wrote on Instagram: “Thank you @zabit_magomedsharipov for letting my eyes see things in this sport that many people could not see if they lived 100 lives. (And the world has only seen 10% of the many moves you make every day). Can remember so many times coming home from spar and going through the spar video with my son and rewinding 20x and not believing that it’s impossible for the human body to do the things you’ve done effortlessly to do. You will always be the BEST featherweight in the world for me and your team!”

Former UFC champion Joanna Jedrzejczyk, who announced her own retirement after losing at UFC 275, commented on Magomedsharipov’s Instagram post: “Get better soon! Be happy and healthy, Zabit.”

In his retirement message, Zabit added: “Thank you to everyone who has supported me for so long. I didn’t have time to become a champion but I guess I hope I was able to please/entertain you even without that. I’m retiring from being an active athlete, but I’m not leaving the sport. I have something and who to share my knowledge with. So don’t say goodbye, friends!” Magomedsharipov’s most recent Instagram post before his retirement announcement showed him June 13 in New Jersey with Henry, whose gym is in the Garden State.

Zabit will be present in MMA through his younger brother Khasan Magomedsharipov, among others. The 21-year-old featherweight is 7-0 in his young career. He made his Bellator debut in 2021 and has two wins, over Jonathan Quiroz at Bellator 263 in July 2021 and over Jose Sanchez at Bellator 275 in February 2022. His older brother was on the cage for both fights along with Henry. His next fight has not yet been announced.

While Zabit has never held gold at an American MMA promotion, his brother hopes he will be able to. The younger Magomedsharipov said through an interpreter at his press conference after his first Bellator win: “It’s not pressure, but even your opponents, when they see your last name, they start preparing twice as hard because they’re expecting something.” He said he was even more motivated to succeed because of his brother’s success. He said he doesn’t think it will be long before he gets a Bellator title shot. “I train with some of the best in the sport,” he said. “We have the best coaches in the world. I don’t think it will take long. I will be there in a few years.”

After his brother announced his retirement from the UFC, Khasan posted a photo of him in his corner on Instagram and wrote: “What’s next coach @zabit_magomedsharipov 😁 Lots of work to do.”