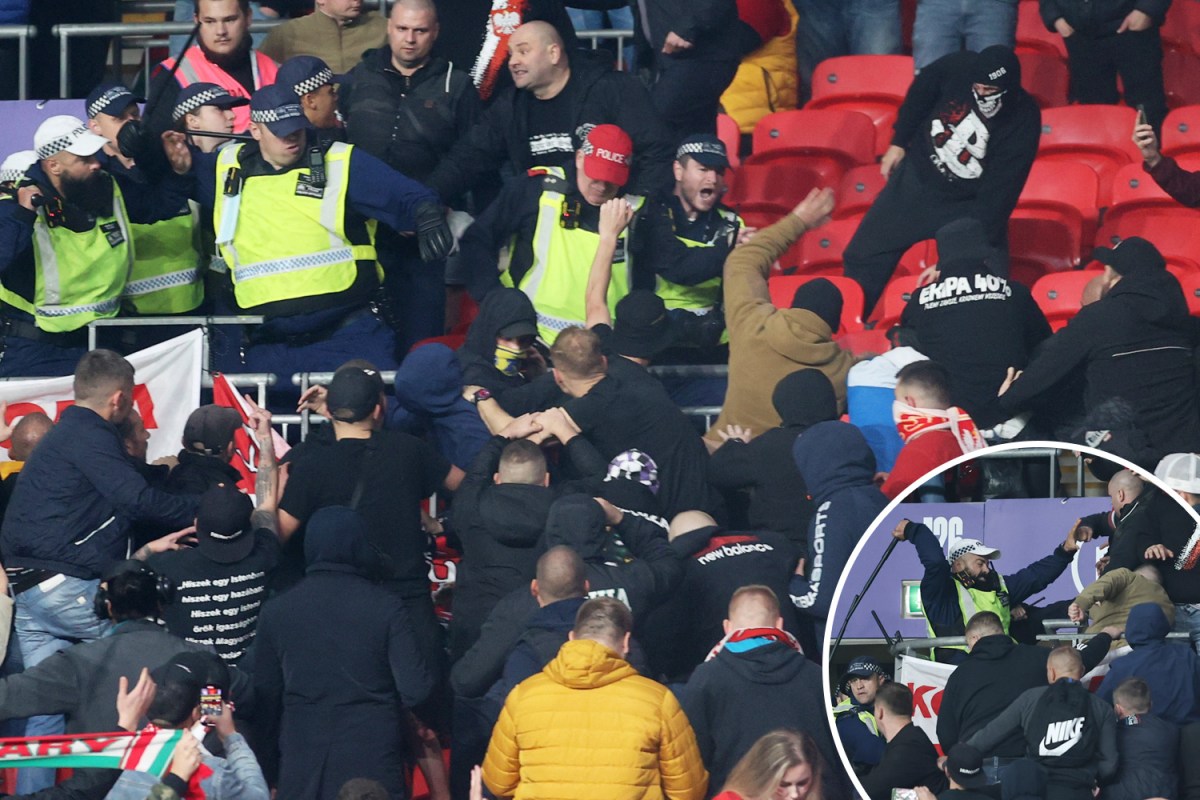 Within three minutes of kick-off at Wembley Stadium, CROWD problems broke out in the Hungarian part of the audience.

Numerous Hungarian fans made their way to the stewards who worked in the small area closed off for visitors.

In frightening scenes, the 20-strong group of stewards had to protect themselves from attacks from all directions when tensions spilled over.

They received welcome reinforcements from the police, who tried to wade in with batons to restore order.

But the line of stewards and policemen were being driven through the tunnel under the stands when they were beaten and kicked.

The game continued as normal when England attacked on the left flank, a few meters from where the problem was.

The riot police and stewards finally restored order to the stands as things calmed down.

It’s the second time riots have flared up at Wembley this year after the turnstiles were stormed at the Euro 2020 final in July.

The FA is still waiting for a Uefa disciplinary decision on this incident – and the governing body will certainly be investigating this recent act of violence.

The FA expected around 1,000 visitors to qualify for the World Cup, most of them from Great Britain.

Before kick-off, the Hungarian fans whistled loudly as England’s players grabbed their knees while the visiting team stood still.

A banner was unfolded showing a symbol against kneeling – but home help responded with loud applause.

In case there is more trouble, the riot police have now taken a position under the grandstand under the small away area.

Today’s game at Wembley is the second leg of the one that took place at Puskas Arena last month, which featured racial slurs against English players.

Objects were thrown at three Lions players in the second half and a flare was thrown onto the field by the home fans, whereupon Fifa opened disciplinary proceedings after the game.

Although Uefa ordered Hungary to play three home games behind closed doors after their supporters discriminated against each other at Euro 2020, fans were allowed to enter as the game fell under Fifa’s jurisdiction.

England condemned the abuse as “totally unacceptable”, while British Prime Minister Boris Johnson called on FIFA to “take strong action against those responsible for the shameful behavior”.