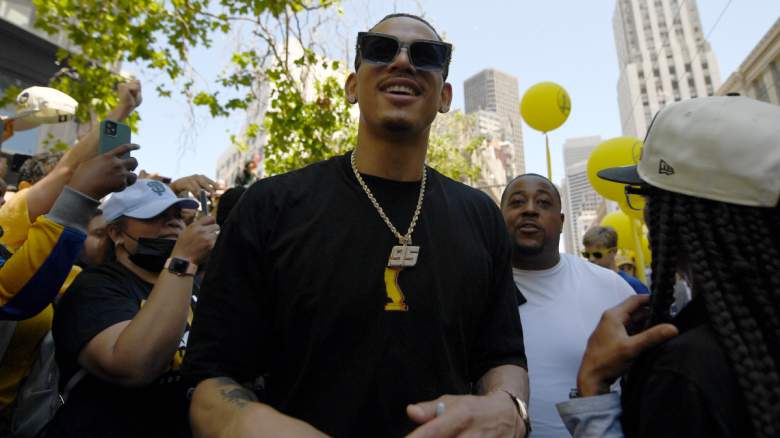 Golden State Warriors star Stephen Curry took time out from his summer stress to spend the day at the Oakland Coliseum on Wednesday. However, he wasn’t just there to witness the series finale between the Athletics and Astros.

Instead, Curry and his wife Ayesha represented their Eat.Learn.Play. Foundation, which partnered with the A’s to enroll more than 1,000 children from the Oakland community at the game.

It’s been a busy day for the Curry clan, starting with Steph A’s manager Mark Kotsay dropping batting practice. He also went to the A’s clubhouse to spend time with players and coaches before the game. Afterwards, Kotsay joked that he would be willing to add Curry to the heart of his batting order.

One thing he definitely won’t do anytime soon is give Steph a spot on his pitching rotation; not after the ballplayer’s performance in delivering the ceremonial first throw.

Both Steph and Ayesha went up the hill just before the competition to throw the first few pitches in tandem, which turned out to be unexpectedly special.

For her part, Ayesha threw a harmless, direct one-hopper to Kotsay, bypassing her own catcher in the process. Unfortunately, the Warriors star fired his ball at A’s manager at the same time.

Kotsay might have at least had a fighting chance of snagging both balls if Steph’s shot had just flown right. Instead, it raced wildly outside the batter’s box, forcing the 46-year-old to give up Ayesha’s ball and dive into the dirt to stop the wild pitch.

Juan Toscano-Anderson, Steph’s former Dubs teammate, didn’t want to put up with the mishap. The Oakland native-turned-Lakers wing slammed the ad via Instagram, writing, “@Stephencurry30 I never want to hear you say a word about my first pitch ever again.”

The reigning Finals MVP later lamented his pitch as he joined A’s commentators Glen Kuiper and Bip Roberts in the broadcast booth.

“All my friends teased me about how bad my pitch was going to be,” Curry said via NBC Sports Bay Area & California. “I wanted to throw some heat and when I got up there I felt the presence on my right side but I didn’t really know how to do the clearance and stuff so I went a little to the right. I’m glad he picked it up out of the dirt and didn’t make me look bad.”

Steph definitely did better when he was at the plate before the game. Even though he was stabbed by his wooden club.

“I played baseball until I was 13 and grew up in Charlotte, North Carolina. I have some basics, but we didn’t hit with the wooden club back then, so that was the most interesting part. I don’t know, it was 55-60mph coming my way, a few of those stung a bit, it woke my hands up a bit, but it was nice to just get some turns and feel like I was doing the move the ball a bit.”