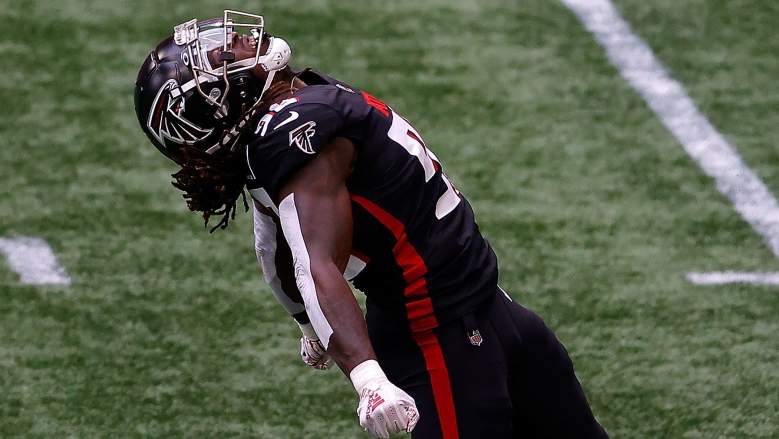 Takkarist McKinley is now on his fourth NFL stop — four goals since he was drafted in the first round of the 2017 NFL Draft. And in his last live appearance, he retired in week 15 of the 2021 season with a torn Achilles tendon.

It’s been ten months since he’s been through surgeries, rehab and a chance to continue his NFL career. Now McKinley not only goes to the “Rams House,” he reunites with the man who helped separate him from the Atlanta Falcons in Raheem Morris. Also, the Rams mark a homecoming to LA for the edge rusher, who rose to college stardom with UCLA in nearby Westwood.

McKinley walked in beaming, standing in front of his new locker. But he also shared his honesty in his first interview with LA media since his Bruin days … including what he thought was the best thing that could have happened to him before returning to LA

Most NFL players, athletes in general, dread the process of thinking about an Achilles tendon rupture. All the hours, the agony, and wondering if they’ll ever be the same mountains in the brain cells again.

“I’ll be honest, I had to grow up,” McKinley told reporters. “I think I didn’t take a lot of things seriously growing up, be it diet or whatever.”

And that’s where McKinley began to make that important investment: in himself.

“As you get older in this league, you realize your body is your money,” McKinley said. “Your body is your way of nurturing. I had to learn the hard way and sometimes you had to go through some things to learn. And now I have a nutrition plan and make sure I take my vitamins. I just do all the little things I’m supposed to do.”

Most tellingly, he bestowed this title on suffering that injury in the 16-14 loss to the Las Vegas Raiders:

“Honestly [the Achilles injury] was the best thing that could have happened to me, as crazy as it sounds,” McKinley said.

McKinley is still trying to adjust to his new LA digs — from knowing how to get to the Rams’ facility to working with Aaron Donald and co. on defense. But it took a long time to get back in the groove run through defensive line drills.

“I think I was 10 months old when I had the surgery. Today was my first day of putting on shoulder pads since tearing my Achilles tendon,” said McKinley. “Just getting a feel for things again, like the weight of my helmet and the weight of the shoulder pads, just trying to get comfortable with that, is different than not wearing any gear. It was a great feeling to just get out again.”

McKinley doesn’t have to start on the practice team either, as he will be one of the Rams’ active 53 options. Does this mean he will make a return against the Arizona Cardinals on Sunday, September 25?

“I’ll leave that to the coaches,” McKinley said. “I just feel like: stay ready so you don’t have to be ready. When my name is called and they need me, I’m here. I will play hard, play relentlessly and give my all in every game.”

But for now, McKinley has arrived with an honest reflection on his path to returning to the field… and this time to City, where he became a defensive star.

“It feels great to be back on the pitch. It’s been one hell of a journey just to get to this point. And just to be able to be in an NFL locker room again, especially with the LA Rams who just won a Super Bowl, we have a team that’s grown together and I’m here to help in any way I can. I am very grateful and it was a great first day.”

But for now, McKinley has arrived with an honest reflection on his path to returning to the field… and this time to City, where he became a defensive star.