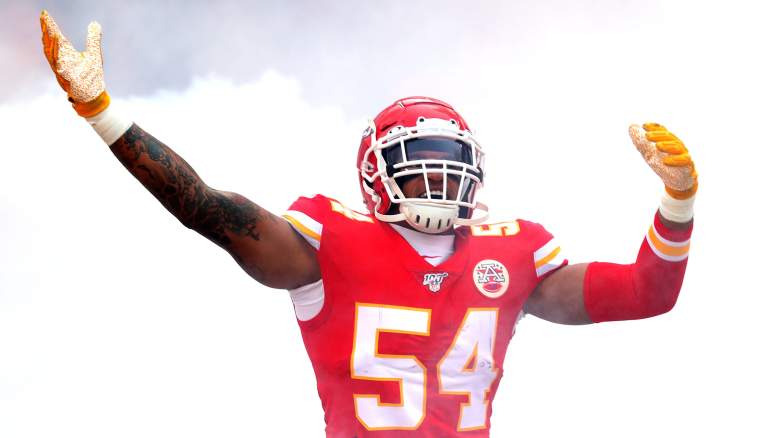 Wilson also allegedly popped out of the bushes outside of Sokolosky’s house with a tire iron and threatened to kill his former girlfriend when she and her female friend were leaving Sokolosky’s apartment. Sokolosky also alleged Wilson tried to run her over and also choked her friend, according to the Morning News.

The latest Chiefs news straight to your inbox! Join the Heavy on Chiefs newsletter here!

Wilson’s attorney denied the allegations against the ex-chiefs linebacker.

“Damien Wilson did not commit any type of assault,” Wilson’s attorney, Toby Shook, told the Morning News. “We look forward to all the facts coming out so his name can be cleared.”

Sokolosky made a post on Facebook on April 16, which explained that Wilson had cheated on her, which led to her ending the relationship.

Wilson was a former fourth-round pick of the Dallas Cowboys in the 2015 NFL Draft. In four seasons in Dallas he played in 64 total games — starting 22 of them — and recorded 86 tackles, nine tackles for loss, and eight quarterback hits, per Pro Football Reference. He played a total of 922 defensive snaps with the Cowboys, and also registered 1,319 special team snaps.

After being released by the Cowboys following the 2018 season, the Chiefs signed Wilson to a one-year contract. Wilson became a full-time starter for Kansas City during their Super Bowl run the following season, recording 52 tackles during 16 regular-season games and 13 tackles in three playoff games. He was also a full-time starter the following season after re-signing with Kansas City on a one-year deal, recording 46 tackles in 13 regular-season games and nine more tackles in three postseason outings.

In 2021, Wilson signed a two-year, $5.75 million deal with the Jacksonville Jaguars, per Pro Football Reference. He only played one season in Jacksonville, however, recording 59 tackles, five tackles for loss, five quarterback hits, and three sacks in 17 regular-season games.

In March, Wilson signed a two-year, $6.9 million with the Carolina Panthers, via Spotrac.

Twitter users reacted to the news of Wilson being arrested.

“Panthers LB Damien Wilson Arrested On Assault Charge I always felt something was not about this dude. Jags, you got to do your due diligence and not lie to yourself,” one Twitter user wrote.

“Panthers say they are aware of Damien Wilson arrest – He still remain on their roster. Even though he was also arrested in 2017 for assault as he backed into a woman with his truck,” another Twitter user wrote.

“Phil Snow said he doesn’t want to comment on Damien Wilson because he ‘doesn’t know what his situation is’,” Joe Person of The Athletic wrote of Carolina’s defensive coordinator.