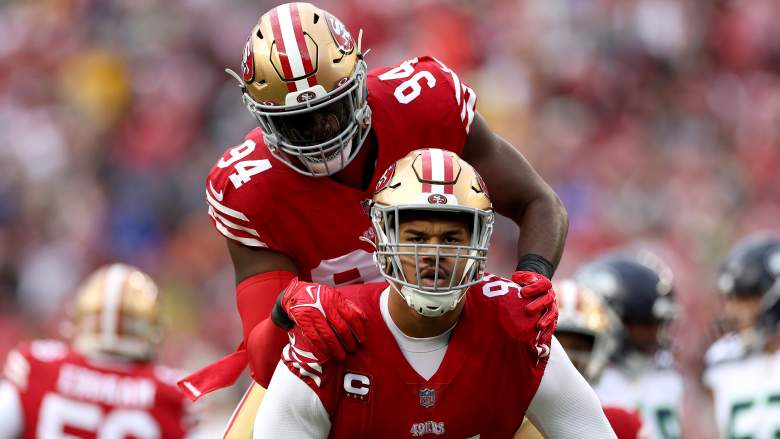 The Philadelphia Eagles are back in the NFC Championship Game for the second time in five years. In 2018, the squad defeated the Minnesota Vikings and bested the New England Patriots to capture the franchise’s first-ever Lombardi Trophy. Your opponent next week? It’s not the Dallas Cowboys.

Their most hated NFC East rival was sent off by San Francisco in Sunday night’s NFC Divisional Round. Rookie quarterback Brock Purdy threw for 214 yards while stud tight end George Kittle made 5 catches for 95 yards. Christian McCaffrey scored his only touchdown in the 19-12 win over Dallas.

Bring on the 49ers or “Until Sunday” as the Eagles succinctly wrote on Twitter. The Eagles and 49ers have met 35 times in NFL history, including a 14-0 win by San Francisco in 1996, the only postseason fight between the two proud franchises. These Eagles obviously expect a better result.

San Francisco finished the regular season with the highest-ranked defense in the NFL. The 49ers ranked first in yards per game (300.6) and points per game (16.3). Defensive coordinator DeMeco Ryans is a top candidate for a head coaching job in 2023. The former Eagles linebacker has so many interview requests that he’s had to turn down some interested teams.

The 49ers ranked 5th in total offense with 365.6 yards per game and 6th in points per game (26.5). They caught lightning in a bottle with Purdy, their third quarterback this season, after losing starter Trey Lance and backup Jimmy Garoppolo to injuries. Purdy has thrown for 1,374 yards and 13 touchdowns in six starts.

There had been brief speculation about Garoppolo’s return for the playoffs after 49ers head coach Kyle Shanahan admitted there was an “outside opportunity”. That probably won’t be the case with Purdy and the offense.

The Eagles announced that single-game tickets for the NFC Championship game will go on sale Tuesday, January 24 at 10:00 a.m. via Ticketmaster. There is a limit of four tickets per household and all tickets will be available on a first come, first served basis. Kickoff is scheduled for Sunday, January 29 at 3:00 p.m. at Lincoln Financial Field.

Philadelphia has held a 5-2 record in NFC championship games since the merger in 1970. In the last game at the Linc, they earned a 38-7 win over Minnesota.

Nick Sirianni admitted The dressing room after the game was “lit up” on Saturday night. Taking his time to savor and enjoy the moment, he wore the Dream Chasers chain and pounded it for his players. He wouldn’t apologize for taking it all in after his first playoff win as head football coach.

“It was lit in there,” Sirianni said. “It was fun in there”

The relaxed atmosphere However, it was only for one night. Sirianni said the coaching staff were due to come back to the office on Sunday to watch the tape, although they were allowed to “sleep a bit”. On to the next. Sirianni didn’t care about the opponent.

“The only next goal is who we want to play against next and win that game and then go from there,” Sirianni said. “So our focus will not change. Our focus is, hey, we’re climbing this mountain. We are close. We’re close to the top. Don’t look up just yet. Check out the steps to take this week. That was the message all year. Our boys say the same. Rent is due today.”