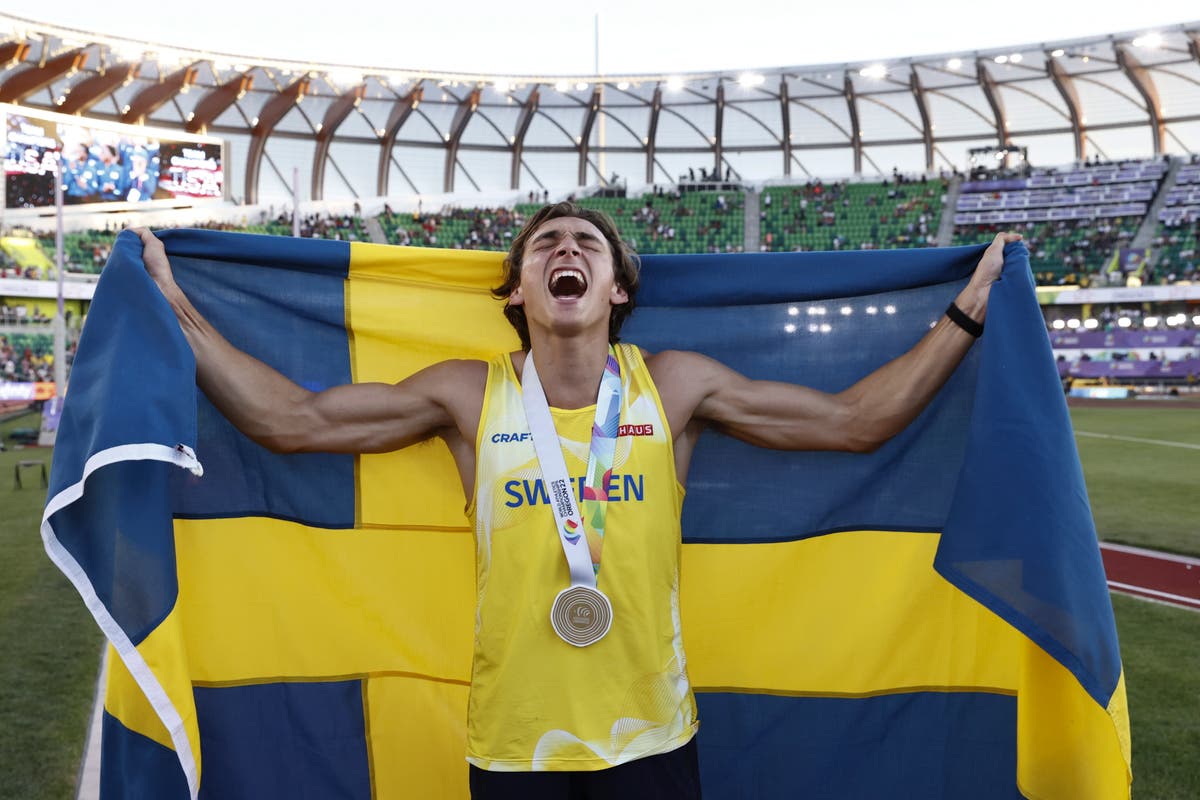 Armand Duplantis lowered the curtain on the World Championships in stunning fashion on Sunday by breaking his own pole vault world record in the final act of the 10-day track and field meeting in Eugene.

After the United States clinched convincing victories in both the men’s and women’s 4×400 relay, Duplantis took center stage and delivered a perfect finale to the first championships on American soil.

The Swede sailed 6.21 meters to surpass his previous mark – set in March en route to winning gold at the World Indoor Championships – by an inch and complete his medal tally by winning a first world title.

“It’s great; I can’t complain,” said Duplantis. “Actually, I wasn’t thinking that much about the record today… I really wanted to win gold. It was the medal I was missing.

“So when I was at that height, it was like it all came together and happened from there.”

American Chris Nilsen took silver with a 5.94 meter countback ahead of Ernest John Obiena, whose bronze was the Philippines’ first-ever World Championships medal.

Unheralded Nigerian Tobi Amusan had previously stolen the show in the women’s 100m hurdles, setting a new world record of 12.12 seconds in the semifinals.

She then won the gold in a 12.06 originally announced as a world record, although excessive wind speeds meant her time was ruled out.

“The goal was to come out and win that gold… The world record is a bonus,” said Amusan, who finished 0.17 seconds ahead of Jamaica’s Britany Anderson, while Puerto Rico’s Olympic gold medalist Jasmine Camacho-Quinn took home the bronze went.

Jakob Ingebrigtsen of Norway made up for that second-place finish in the 1,500m with a convincing victory in the 5,000m where reigning Olympic champion and world record holder Joshua Cheptegei faltered and finished in ninth place.

“I needed it,” said Ingebrigtsen. “I felt really good today… but 5K is a tough race.”

In the morning session, Italy’s Massimo Stano clinched a one-second win over Masatora Kawano of Japan in the men’s 35K, adding world gold to his Olympic crown.

The United States ended the championships by cementing its place at the top of the medal table with a championship record 33 medals.

The quartet of men finished in two minutes and 56.17 seconds, tightening the Americans’ stranglehold on the event. The United States has now won eight of the last nine world titles and eight of the last ten Olympic gold medals.

Sydney McLaughlin, the newly crowned gold medalist in the 400m hurdles, led the women’s team and ran a remarkable 47.91 finish to give the hosts their 13th gold medal at the event.