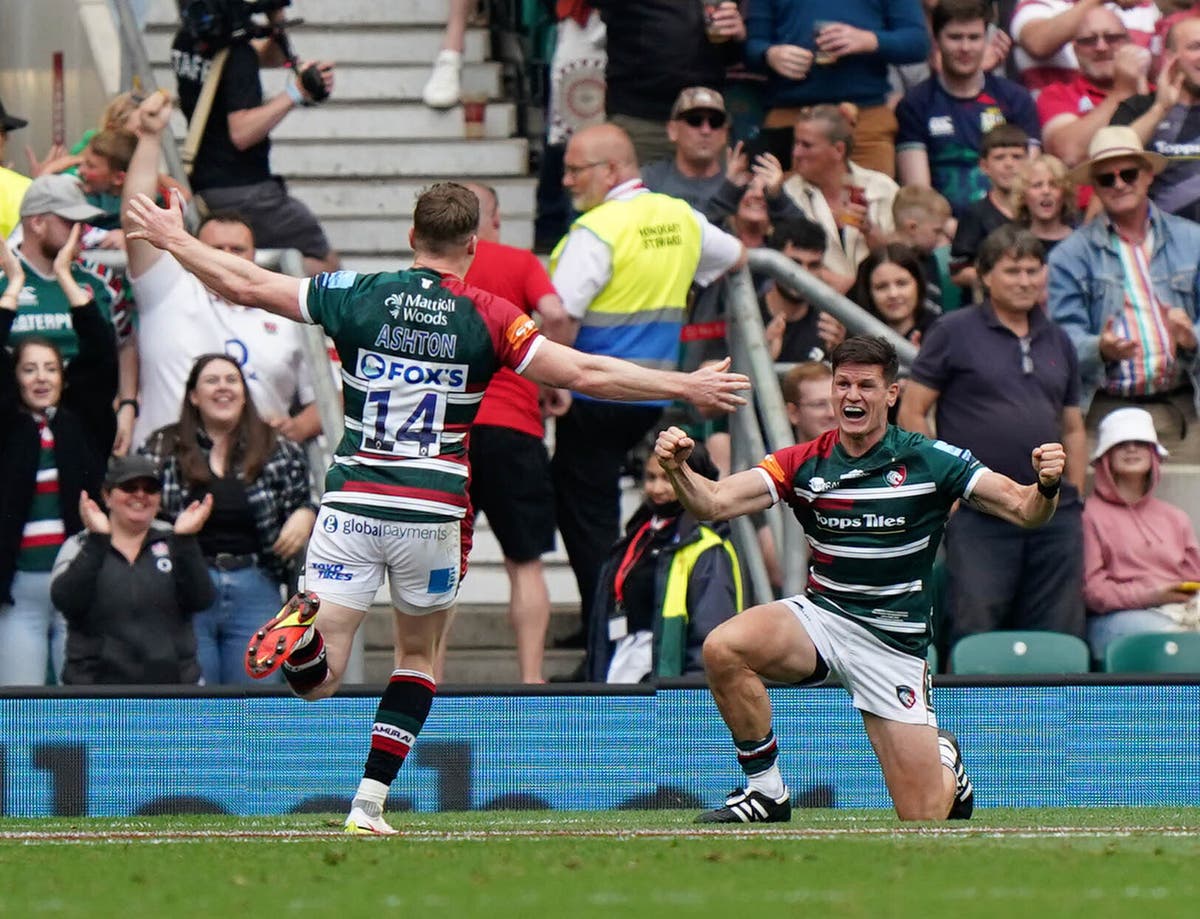 The Saracens’ hopes of completing a stunning climb following the salary cap scandal and humiliation on relegation to regain the domestic silverware were dashed by the snarling tigers.

Leicester overcame the loss of injured talisman George Ford in the first half in their last appearance before joining Sale this summer to end a nine-year wait for title glory.

Attempts from their South African strikers from the back, Hanro Liebenberg and Jasper Wiese, during an eight-minute break in the second quarter underpinned Leicester’s victory.

Saracen’s scrum-half Aled Davies was off the field for both points after falling into a trap after a high, shoulder-carried attack on Tigers hooker Julian Montoya, although thankfully he avoided a red card.

Ford’s replacement Burns added a conversion ahead of his dramatic clincher, while Saracens skipper Owen Farrell had three penalties and Elliot Daly one.

But the Saracens’ dream of a sixth-tier crown was dashed just 15 months after the Cornish Pirates ambushed Penzance – after being downgraded to the Championship and being fined £5.36million for repeated breaches of the salary cap , was wiped out.

Leicester escaped relegation two years ago only because of punishment from the Saracens, but the revival under head coach Steve Borthwick has been spectacular.

And after finishing first after the regular league season, they not only won all 12 home Premier League games and one play-off, but also delivered when it mattered.

The Saracens saw only one change after their play-off win over the Harlequins, with Lock Nick Isiekwe replacing Tim Swinson.

Leicester came under the immediate pressure and Farrell took a penalty in the fifth minute after Liebenberg injured Nick Tompkins with a challenge.

The Tigers grew into the game, winning an offensive five-yard scrum after defensive hesitation between Saracens defenders Davies and Alex Goode.

But Leicester captain Ellis Genge was punished for breaking down the scrum and the Saracens pushed back up through a Billy Vunipola attack.

Ford missed a chance to match Leicester’s level when he missed a 38-metre penalty chance and his departure from the Tigers then ended prematurely when he limped away after a clumsy fall.

The temperature on the pitch had gone up a notch and Davies was given a yellow card for his fight against Montoya, while Leicester immediately penalized Sarries.

The Leicester defenders launched an exciting move that saw Saracens step back and Liebenberg crossed from close range before Burns converted.

The Saracens had to regroup and Daly took a 48m penalty, reducing the deficit to 7-6.

But Leicester struck again just before Davies returned, with Wiese scoring from a quick Genge penalty and Tigers leading by five points at the break.

Saracens’ Sean Maitland did not return in the second half, with Alex Lozowski replacing him while Daly switched from the middle to the wing.

Leicester had all the momentum and exerted relentless pressure midway through the third quarter after Burns missed a long-range shot.

The Saracens’ defense was tested in all areas but they managed to keep the Tigers out and were still six points down in the final 20 minutes.

Farrell’s second successful penalty put the Saracens back within reach and the closing stages inevitably proved frantic as Tigers substitute Matt Scott received a yellow card for a high foul on Billy Vunipola. Farrell’s penalty in the 76th minute equalized.

However, Burns had the last word as the 32-year-old dropped a goal and Leicester celebrated wildly.