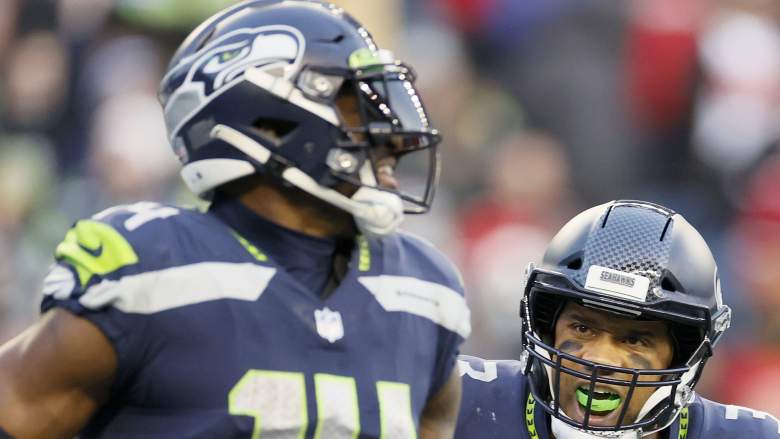 DK Metcalf has skipped all of the Seattle Seahawks’ mandatory mini-camp practices as the star playmaker seeks a new contract. Metcalf remains active on social media but has not spoken out about his future since adopting a stronger stance of perseverance in negotiations.

The Seahawks wide receiver was spotted with Russell Wilson as the former Seattle quarterback and his wife Ciara posted photos of Metcalf to their Instagram Stories. Metcalf posted the photo alongside his former quarterback with a simple caption emphasizing that he remains close to Wilson despite the blockbuster trade this offseason.

“Family,” Metcalf captioned when reposting Ciara’s photo of him alongside Wilson.

Wilson reposted the same photo with the caption “Forever Homies.” The quarterback’s Instagram Story feed also included videos of a competitive card game that he, Metcalf and several others were playing. Metcalf appeared to win some money in the contest when video showed the recipient holding up $20 bills.

Here’s a look at Wilson’s Instagram posts with Metcalf that have since been circulating among Seahawks fans.

Seahawks head coach Pete Carroll confirmed that Metcalf did not participate in mini-camp drills due to the ongoing contract negotiations. Carroll appeared disappointed by Metcalf’s absence, but also expressed optimism that the two sides would eventually be able to reach an agreement.

“A decision he had to make and we missed him,” Carroll said during a June 9 news conference. “He’s done a good job and helped be a part of everything we’ve done and then he’s not here. So I can’t say much about what he didn’t do here, but we’d love to have him with us.”

Carroll said there were talks with Metcalf about a contract extension, but described the current status of the negotiations as “semi-quiet”. Metcalf has one season left on his current four-year, $4.5 million contract and is expected to have a salary of $3.98 million in 2022. If Metcalf doesn’t sign a new contract this year, the receiver could become a free agent in 2023, but the Seahawks also have the franchise tag available to keep the playmaker for another season.

Metcalf has complimented Wilson since the blockbuster deal inked, but also expressed optimism about the current Seahawks quarterback fight between Drew Lock and Geno Smith. Despite more than a year of trade rumors, Metcalf admitted Wilson’s deal with the Broncos surprised him.

“I never thought that one day in my life if you said that to me during the season, I would probably have said, ‘Man, I’m betting my game they’re going to be here next year,'” Metcalf explained during one Interviews on May 2nd on the Club Shay Shay podcast. “And I mean, it just surprised me [it] caught everyone else. I knew I would probably say an hour before the media found out about it [about the Wilson trade]’cause the Seahawks called and told me. Then Russ called me and I knew the same thing about Bobby an hour before the media knew because we were quite close and he told me. But no, I didn’t see that.”