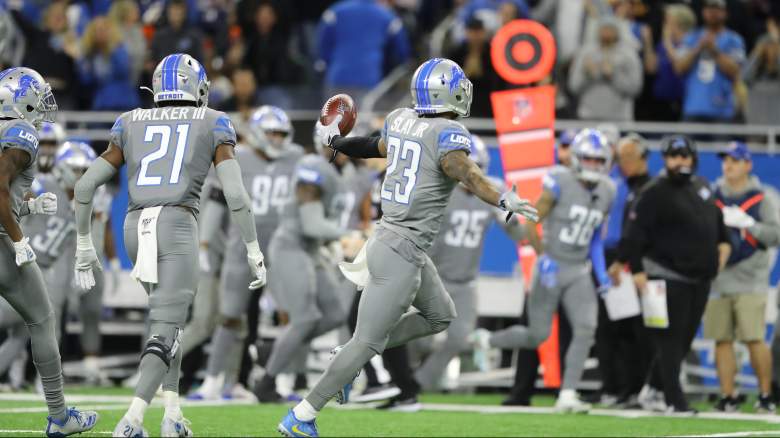 When Matt Patricia made his second stint with the New England Patriots, it was a chance to rekindle his career after his first experience as a head coach. Former Detroit Lions cornerback Darius Slay described how poorly Patricia fared as a head coach.

Patricia spent three seasons as the Lions head coach and was far from successful. He went 13-29-1 in his first stint as head coach. In his best season, Patricia went 6-10 in the 2018 season.

Slay was drafted by the Lions in the 2013 NFL Draft but left Detroit after the 2019 season. During the Lions Secondary patrol, Slay recorded 347 tackles, 104 passes defended, 19 interceptions and two touchdowns per Pro Football Reference.

In a recent podcast appearance, Slay described the first time Patricia rubbed him the wrong way.

According to Slay, Patricia called the cornerback to his office and told him he wasn’t elite and chastised him for working that out with other corners like Richard Sherman, Aqib Talib and Xavier Rhodes.

“He told me out of his mouth, ‘These are elite guys. You are not elite. You are a good player but they are elite. And Sherman is smart. He used you.” He tried to say Sherm used me to know what (then Lions receiver) Marvin Jones was doing. I said, ‘He can find out what Marvin Jones does by watching movies. This has nothing to do with me,'” Slay said.

Slay then described another incident where Patricia was disrespectful to the cornerback. Slay had posted a picture with Odell Beckham Jr. and Patricia wasn’t happy with it.

“He told me in front of the whole team… stop sucking this man’s privates. So I’m like, ‘Whoa.’ I say, ‘Wait,'” Slay said. “Where I come from, that doesn’t fly. Because I wouldn’t tell him that. I wouldn’t tell him to stop Bill Belichick. I would not do that. That’s just not me as a man. It’s disrespectful to me and it was done from there.”

2022 is Patricia’s first season with a coaching job. After a season in which Patricia played a general role, he is now an offensive assistant and offensive lineman coach.

The offensive line struggled throughout training camp and preseason, but was able to turn things around in the regular season. In two games, New England has rushed for over 200 yards along with a touchdown.

Despite being unable to play on the field due to injury, rookie wide receiver Tyquan Thornton was able to get to know his teammates.

Thornton and quarterback Mac Jones appear to have developed some chemistry, and in his weekly interview on WEEI, Jones said Thornton has a secret nickname.

“He has a nickname. You’ll never guess,” Jones said. “You have to ask him.”

The presenters took a few guesses and gave out names like Jack Skellington from “Nightmare Before Christmas” or Roadrunner from “Looney Tunes,” but Jones said the nickname wasn’t one of those.