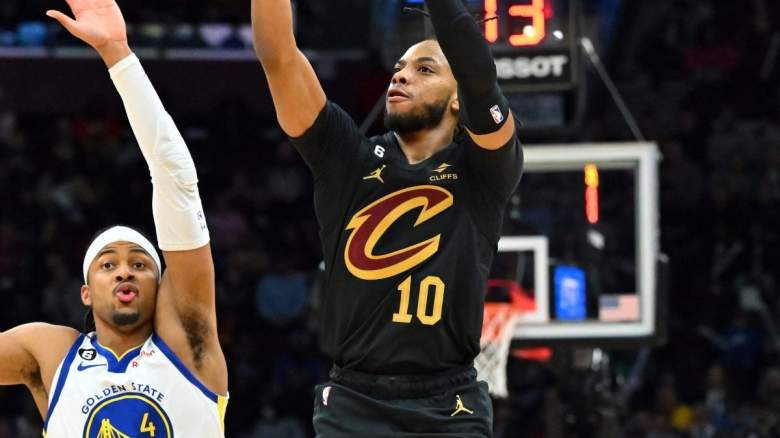 The Golden State Warriors clinched a seemingly unlikely win on Friday night, pulling off a great win over the Cleveland Cavaliers by a score of 120-114. Cleveland was missing Donovan Mitchell, but the Warriors were without Stephen Curry, Draymond Green, Klay Thompson and Andrew Wiggins.

With those four eliminated it was always going to be an uphill battle for Golden State, but they scaled the mountain and clinched a win. After the contest, Darius Garland was asked if he thought the Cavaliers overlooked the Shorthanded Warriors. He said they didn’t and that the guys on the team are in the NBA for a reason.

“I don’t think we missed her,” Garland explained via the Cavaliers’ official YouTube channel. “They are in the league for a reason. So I don’t think they were overlooked. Like I said, they got it going in the first quarter. Getting started in the first game will give you confidence that will lead you through the entire game. And that was it.”

The Cavaliers’ point guard was pushed into a bigger role with Mitchell out and he scored a lot, but his efficiency wasn’t ideal. Garland finished the game with 31 points, two rebounds, nine assists and two steals on 10-of-25 shots from the field and 3-of-11 shots from behind the three-point line.

For the Warriors, Jordan Poole and two-way guard Ty Jerome, both of whom started in the absence of Curry and Thompson. Poole dropped 31 points to keep up with three rebounds and two assists on 10-of-23 shots from the floor and 5-of-12 shots from long range.

Meanwhile, Jerome finished the season with 22 points. He combined that goal with a single rebound and eight assists, which also meant a season-high in dimes. The 25-year-old guard shot 9 of 13 from field and 3 of 4 from beyond the three-point arc.

While Golden State was able to claim the win, the game wasn’t without its fair share of drama. With seven seconds left in the third quarter, Poole was called out for an offensive foul before the ball came in and he argued with the umpires, earning him a game penalty delay that allowed the Cavaliers to hit a technical foul.

Head coach Steve Kerr wasn’t happy and could be seen on the sidelines telling Poole to “lock that shit up”. After the game, he broke down the incident and admitted Poole had played well overall, but at that moment he just “snapped.”

“I will stay in Jordan,” he said of NBC Sports Bay Area. “He keeps growing and getting better and better. I think in the last two games he’s been fantastic at staying away from the referees. He got the offensive foul and then saved the ball when he spoke to the referee and that was a game delay. So I’m trying to get Jordan to the point where he understands that every game matters and every moment matters. So every now and then I’ll snap and I’ll snap at that moment and he’ll look at me like I’m crazy. But it’s all part of it. I love Jordan and I love the way he plays and he was amazing tonight.”

Also, Curry had some thoughts on the altercation. He praised Kerr’s coaching habits and Poole’s response.

“Hey to all the kids watching this clip…Coach Kerr is training like he should.” Curry commented on a post by House of Highlights, via NBC Sports Bay Area. “JP puts the energy on the right path. Both keep trying to win the game!!! @houseofhighlights make sure you show how @jordan_poole recovered afterwards.”