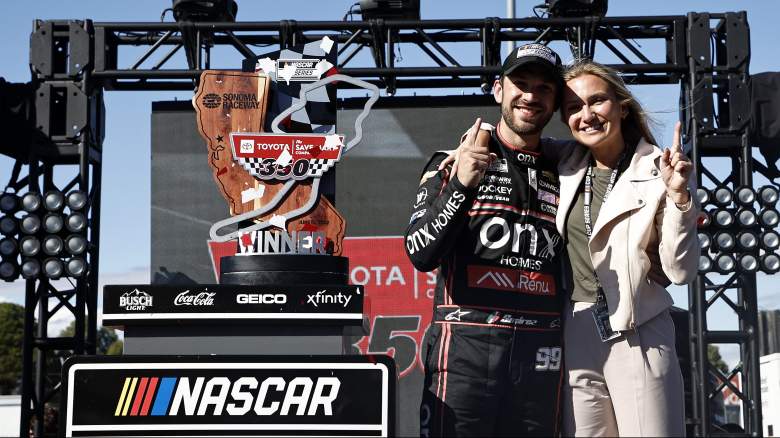 The #99 driver just posted an update on his NASCAR future. Daniel Suarez addressed the threat of free agency and gave an update on ongoing contract talks with Trackhouse Racing. He doesn’t know when he’ll get a new contract, but he’s not leaving the two-car team.

“Concerning the contract and stuff – actually I signed a two-year contract with Trackhouse,” Suarez said after his win, video courtesy of NASCAR Media. “And a month ago we started talking about contracts again. Just to get a new contract for – I don’t know – the next year or two or whatever that might be.

“Honestly, the first thing that came out of my mouth a month ago when we started these conversations was, ‘I don’t even want to talk about this right now. I do not care.’ My focus was elsewhere.’”

While Suarez said he didn’t want to talk about his contract at the time, he made one thing clear. He reiterated that Trackhouse Racing is his home and that he will be “not going anywhere” after the 2022 season.

When Suarez signs his new deal with Trackhouse Racing, it’s expected to cover more than just the 2023 Cup Series season. Justin Marks’ own team has shied away from short-term deals in its short existence.

As noted by Suarez, he signed a two-year deal when he agreed to join Trackhouse Racing as the team’s first driver. He took over the #99 Chevrolet Camaro for both 2021 and 2022, so there’s no reason to expect a new shorter-term contract after he’s clinched a win.

Similarly, teammate Ross Chastain provided some stability when he agreed to drive the #1 Chevrolet Camaro. He also signed a multi-year contract with Trackhouse Racing after the team bought NASCAR operations and charters from Chip Ganassi Racing.

Signing multi-year deals ensured that both Chastain and Suarez didn’t have to focus on their contract situations early in their tenure at Trackhouse Racing. Instead, they could only focus on chasing wins and consistent placements.

The driver of the #99 Chevrolet has already ensured that 2022 will be the best season of his career. He captured that elusive victory, celebrating in victory lane after frustrating near misses with Joe Gibbs Racing and Stewart-Haas Racing.

Suarez can still keep up with some other important stats. He has five top 10 finishes and three top 5 finishes in the first 16 races of the year. If he keeps his pace, he will end the season with 11 top 10 finishes. This would correspond to the 2019 season, and it would be a top-10 behind the 2017 season. Suarez has already made his three top-five from the 2018 season, and he just needs one more to match his career best of four from the 2018 season reach 2019 season.

Suarez has an opportunity to continue to perform strongly and match or surpass his career best top 10 and top 5 marks. However, he must avoid accidents or other problems that have bothered him at Charlotte Motor Speedway, Talladega Superspeedway, Circuit of the Americas and Las Vegas Motor Speedway.