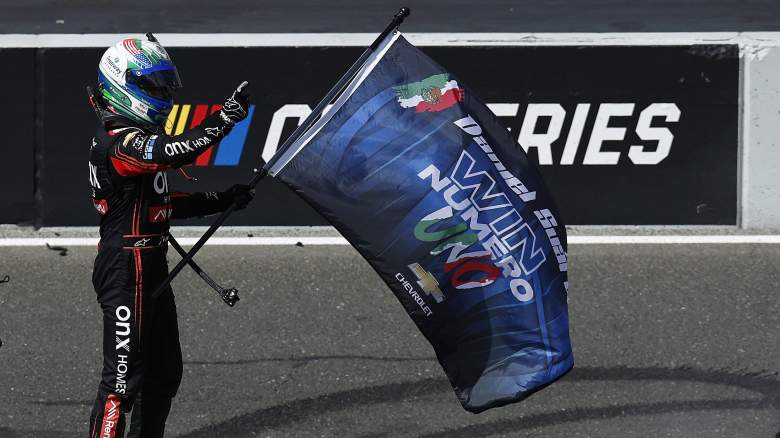 The driver of the #99 Trackhouse Racing Chevrolet Camaro just made NASCAR history. Daniel Suarez won at Sonoma Raceway to become the first driver from Mexico to win a Cup Series race.

Suarez started in the top 10 after reaching the second round of qualifying and put on a career-best performance. He led a total of 47 laps and set a new career high for a single season at 203, and he held several drivers back to the checkered flag in the final heat. Chris Buescher kept pace with Suarez for several laps as he returned from COVID-19, but the No. 99 driver built a lead of more than five seconds before crossing the line first.

In addition to becoming the first driver from Mexico to win a Cup Series race, Suarez also joined an elite roster. He is one of only five foreign-born drivers to win at the highest level of NASCAR. The others are Mario Andretti (1967 Daytona 500), Juan Pablo Montoya (Sonoma 2007, Watkins Glen 2010), Marcos Ambrose (Watkins Glen 2011-12) and Earl Ross (Martinsville 1974).

“Today is a crazy day. I have so many thoughts in my head right now” Suarez said FOX Sports’ Jamie Little after his celebratory burnout. “I mean, it’s been a bumpy road. It’s been a tough journey in the Cup Series.

“These guys believe in me, Trackhouse Racing, Justin Marks, Ty Norris. Everyone who helped me get to this point. I have a lot of people in Mexico – Jay Morales, Carlos Slim. My family. You never give up on me. Lots of people did it, but they didn’t. We’re just really happy that we were able to make it work.”

Of course, Suarez had to have a special celebration after his first win in the Cup Series. Ross Chastain traditionally smashes a watermelon after reaching Victory Lane, preventing the No. 99 driver from driving that route. Instead, he grabbed a taco-shaped pinata and smashed it on the floor.

This win was crucial for Suarez. After three consecutive finishes outside the top 20, he went into the race weekend 20th in the championship standings. Suarez found himself in a must-win situation, making him a long-range shot to go into the playoffs with Chastain. However, he is now in the 16-man field with 10 races remaining.

Suarez passed several competitors by taking the win at Sonoma Raceway. He now has an advantage over Tyler Reddick, Kevin Harvick, Erik Jones, Austin Dillon, Aric Almirola and Christopher Bell. Although he still needs to earn points to further consolidate his place in the field of 16 riders.

Reddick and Jones both faced different issues in Sonoma, but Harvick put on a strong performance. He started the weekend as the first rider below the cutline but picked up six points in Stage 2 before finishing fourth overall.

Harvick made some moves on the road but a very slow pit stop kept him from fighting with Suarez for the win. Now his former Stewart-Haas Racing teammate has the advantage going into the off-week.

Racing at Sonoma Raceway was historic for a number of reasons. Suarez was the first driver from Mexico to win a Cup Series race and he also joined a prestigious list of drivers to have won at least one race in all three series. Although Suarez is the only rider from Mexico who has managed this feat.

Suarez has only one win in the Camping World Truck Series. He captured the 2016 race at Phoenix Raceway while completing a part-time schedule for Kyle Busch Motorsports. This is also the same year he won poles in Kentucky.

Suarez achieved notable success in the Xfinity series. He ran full time in 2016 while driving for Joe Gibbs Racing and he won three races. He also finished top 10 in 27 of the 33 races before ending the season as champion.

Suarez achieved notable success in the Xfinity series. He ran full time in 2016 while driving for Joe Gibbs Racing and he won three races. He also finished top 10 in 27 of the 33 races before ending the season as champion.