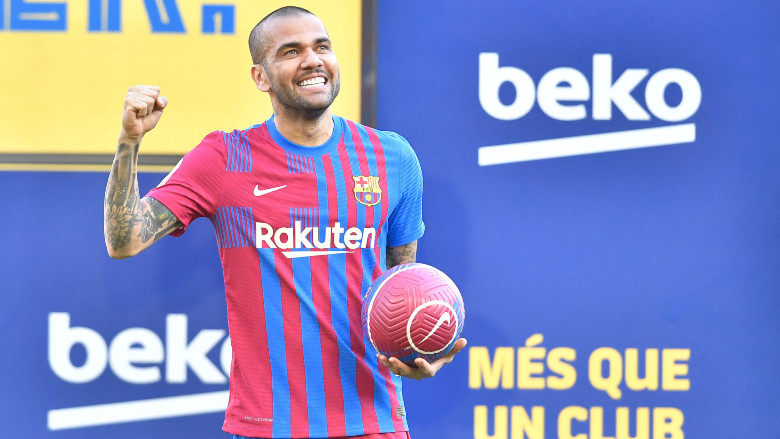 Dani Alves has announced that he is on a mission to get the most out of Ousmane Dembele after returning to Barcelona for a second stint with the Catalan giants.

The Brazilian was introduced as a Barcelona player at a ceremony at the club and then spoke about Dembele at a press conference. The 38-year-old praised the Frenchman and revealed that he would like to believe the youngster.

“I think Dembele is an exceptional player, he said. “He has to understand that he is playing for Barça. It is mine mission to remind him that he is really good, that he is phenomenal and that he can achieve great things at this club. “

Dembele joined Barcelona from Borussia Dortmund in 2017 but has suffered injuries throughout his time at Camp Nou. The striker returned from knee surgery and made his first appearance of the season in the Champions League win against Dynamo Kiev on November 2.

However, Barcelona later announced after the game that the attacker was sidelined again after suffering a hamstring injury.

Alves also spoke about right-back Sergino Dest, saying he wanted to help the 20-year-old. The two players appear to be battling for right-back seat at Camp Nou and Alves believes the USMNT star has a bright future.

“I spoke to Dest, we’re here to help each other,” he said. “He seems like a great player to me. He has everything to be great in football. We have to support these players. We are here to strengthen them. “

Dest’s preferred position is right-back, but he has also played up front and covered as a left-back this season due to injuries in attack, while Jordi Alba was out due to injury.

However, the youngster is currently also out due to a back problem that forced him to miss the USMNT’s World Cup qualifiers against Jamaica and Mexico.

Barcelona’s latest signing also spoke of his desire to bring the team together at Camp Nou. A disappointing start has left the team in La Liga ninth and already 11 points behind the top spot.

Alves say the team must come together to try to shake off recent bad form and get the club back on the road to winning ways, Diario Sport reported.

“I came to bring us together and be great again, to connect with good energy. We all have to do our part. We have to be together more in the tough moments, ”he said. “It’s the toughest challenge and also the most special. When I got the call, I said I wanted to play at Barca. I’ll honor the shirt like I’ve done all my life. “

Barcelona return after the international break on Saturday 17 November with a tricky game against local rivals Espanyol at Camp Nou. The game is new manager Xavi Hernandez’s first game since replacing Ronald Koeman at the helm.