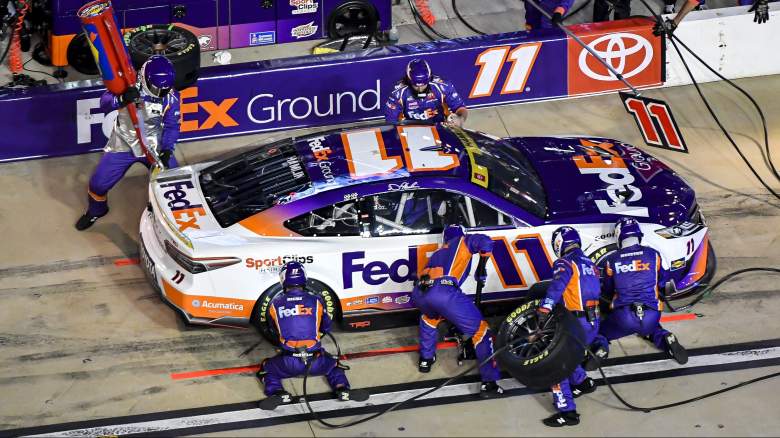 The round of 16 cut-off race at Bristol Motor Speedway on September 17 took a surprising turn. Several NASCAR drivers experienced significant tire problems, while others saw their night end due to a mechanical failure. Now they are ready for some improvements.

Joe Gibbs Racing drivers have been quite vocal both in person and on social media. Martin Truex Jr. brought up Kevin Harvick’s previous comments about “crappy parts” while Denny Hamlin called for Next Gen 2.0. Although drivers from other teams also chimed in and mentioned that there were only four green flag passes in 500 laps.

“Overtaking was just impossible,” Hamlin told NBC Sports after the race. “It was just a day where you had to stay ahead at all costs and we just couldn’t quite do it and at the end we had a flat tire that set us back and from that point we tried to catch up.

“…I would like to see the race improve overall. Some lap time variations a little. We just run around there and it’s like we’re running faster on the corners than on the straights. Just extremely difficult to overtake. We had some steering issues and it looks like our Toyota team-mates are having steering issues as well.”

Like Hamlin, Brad Keselowski took on a new role in the NASCAR Cup Series. He joined Roush Fenway Racing as a driver-owner and the team became RFK Racing. He has continued to qualify for races each week while taking on more responsibility within the organization.

Keselowski is aware of the issues with the next-gen car, but he has a slightly different perspective than some of his peers. He met with media at Bristol Motor Speedway and said that there are currently two camps in NASCAR. It is believed that everything is terrible with the new cars. The other believes that the next generation era is perfect. Keselowski is in the middle.

“Would I like to see how we continue to work on the cars? Absolutely,” said Keselowski after the race. “I’ve said that to NASCAR and the media before, and I’ll say it again. If the next-gen car looks the same as it did this year, then we’ve failed. We should keep growing, we should keep learning, we should keep improving.

“There are probably some car owners who don’t want to hear it because it costs money to switch cars, but as with anything, when you develop something new like the next-gen car, there are going to be things that get tweaked, and it continues to be things that aren’t.

“I think there are ways to further improve this car and make the races better with it. I think it’s still a step forward in many ways. I think we’ve seen some great races because of that great parity.”

One of the drivers who struggled the most during the playoffs was Kyle Busch. The two-time Cup Series champion had speed, but his results didn’t reflect those performances on track.

The Southern 500 at Darlington Raceway was a fitting example. Busch led the final stage but his engine died while doing laps under caution. He had to go to the trucking company while Erik Jones and Denny Hamlin fought for the win. Busch then finished 26th at the Kansas Speedway after a late spin.

Busch had similar problems at Bristol Motor Speedway. He had speed again and was able to score points in stages 1 and 2. However, major engine failure again ended his day and sent him to the trucking company. By two points, he ultimately missed the entry into the round of 16.

“It just suits our vintage. I don’t even know what to say,” Busch told NBC Sports after exiting the race. “I am shocked. I just feel so bad for my boys. You don’t deserve to be in this place. You work too hard. We’re too good a group to be that low – way down, fighting for our lives just to make it through. Two engine failures in three weeks, that makes a difference.”

The Voice 2022: Who is Cara Brindisi? Fans were surprised that music therapist Blake didn’t choose Shelton as their coach

The Voice 2022: Who is Cara Brindisi? Fans were surprised that music therapist Blake didn’t choose Shelton as their coach