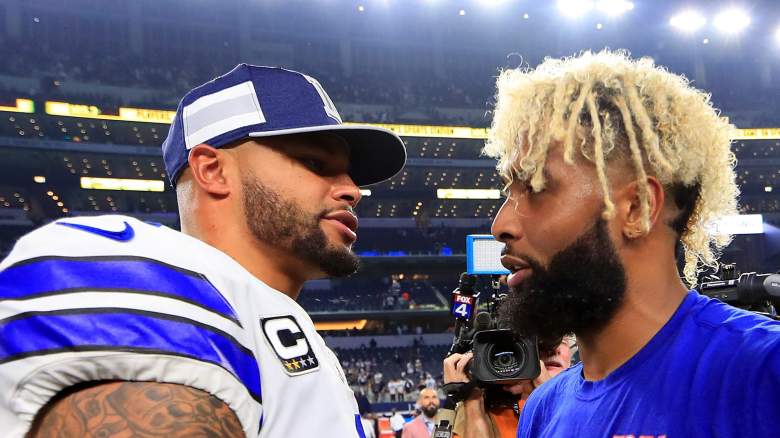 The Dallas Cowboys continue to eye the signing of Odell Beckham Jr., with the team set to host an in-person meeting with the star playmaker on December 5. per Fox Sports’ Jay Glazer. The NFL insider also reported that the Giants plan to “hunker down” after the Thanksgiving rivalry matchup to also set a date to meet Beckham.

“Obviously they’re two of the front runners for his services and now his schedule is getting a little clearer,” Glazer explained in the Nov. 24 edition of NFL on Fox ahead of the Cowboys-Giants game. “The Cowboys are currently scheduled to meet with Odell tentatively, not this Monday, but the following Monday, December 5th. Giants Brass, they’ll be huddled after tonight’s game to figure out if they should meet him next week or even the week after. But Odell is definitely keeping an eye on this game.”

It will be interesting to see if the Cowboys make Beckham an offer that will allow the team to prevail against the other contenders. Clarence Hill of the Fort Worth Star-Telegram previously reported that Beckham prefers not to play in a cold-weather city, which would give Dallas an edge over the other finalists.

“As far as I know, Odell Beckham prefers not to play in a cold weather town,” Hill tweeted Nov. 8. “He’ll do it for the right deal. But he prefers to be in a warm place, especially when coming from this ACL. The ball is at Cowboys Court #DallasCowboys.”

After what was dubbed the “Odell Bowl” between the Cowboys and Giants, Beckham went viral for his reaction to the game. The playmaker wished everyone a happy Thanksgiving, adding a cry-before-laugh emoji.

“Happy Thanksgiving 👀 😂🤟🏾,” Beckham noted in one Tweet from November 24th.

When asked about the report of the planned meeting, Cowboys owner Jerry Jones said he had a “good visit” at Beckham’s on Thanksgiving. Jones later clarified that the meeting was not personal.

“We had a good visit today,” Jones declared during his Nov. 24 Thanksgiving media session.

The Cowboys’ owner admitted he didn’t know if Beckham would fit this season, but the team is expected to find out after meeting the wideout. Jones cited Beckham’s health as well as financial details as two of the main factors behind the decision to potentially sign the playmaker.

“Well, I don’t want to make any comparisons [to Deion Sanders and Charles Haley], but Odell could help us, I think so at the moment,” Jones added. “Now we have to make it fit and that is the challenge. … I think just the general “how do we make this fit” and all that. The availability is huge, but the financial part of it is really huge too.”