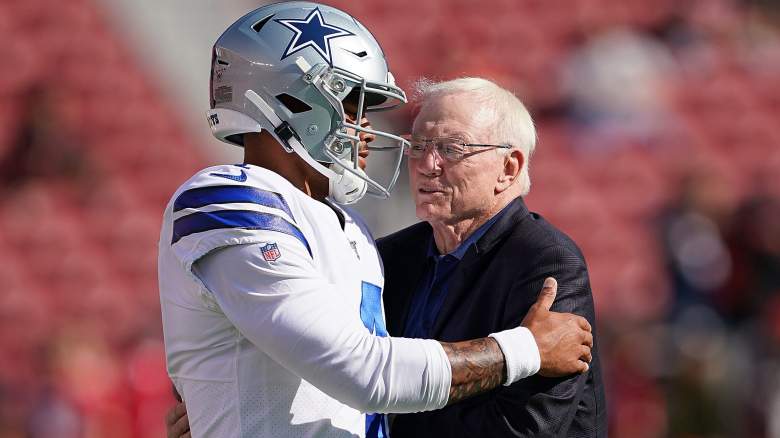 The Dallas Cowboys offense stuttered against the San Francisco 49ers, with Dak Prescott throwing two costly interceptions, including a red-zone pick just before halftime, during the team’s elimination loss. Jerry Jones admitted that Prescott’s two turnovers were a key factor in the team’s loss, but the Cowboys’ owner still backed the quarterback.

“Give me this setup, with Dak Prescott I have a very strong belief that we’re going to win,” Jones said after the loss, according to Sports Illustrated’s Mike Fisher. “My (commitment to Dak) is as strong as ever. … I keep taking (my chances with him) over and over again.”

A distraught Jones asked questions about his quarterback and coach’s future. Jones continued to hold onto his commitment to Prescott and Mike McCarthy to move forward.

“Jerry Jones keeps repeating that he’s ‘sick’ about the loss of the Cowboys,” Yahoo Sports’ Jori Epstein tweeted on January 22, 2023 “Honestly, turnovers foot the bill in games like this. I’m so disappointed in our fans. We have a dressing room full of sick players.’”

It is the second straight playoff that Prescott’s game has been called into question. The Niners ended the Cowboys season last postseason after Prescott failed to clock the ball following a quarterback scramble. It wasn’t just Prescott’s interceptions, but the offense’s inability to score more than a touchdown that contributed greatly to the loss.

Dallas head coach Mike McCarthy also noted that the Cowboys’ turnovers proved costly as Dallas failed to advance to the NFC Championship. Prescott threw for 206 yards, one touchdown and two picks while completing 62% of his passes in the loss to the 49ers.

The quarterback’s struggles will surely have some Cowboys fans wondering about Prescott’s future, as “Trade Dak” has been trending on Twitter following Dallas’ loss to San Francisco. Both Jones and McCarthy have repeatedly expressed confidence that Prescott is the team’s long-term solution as quarterback, and the poor showing at San Francisco is unlikely to change the team’s belief in its QB1.

Prescott has two seasons left on his four-year, $160 million contract. The Cowboys star is set to receive a salary of $31 million for the 2023 season. During an interview with 105.3 The Fan’s “Shan and RJ” on Nov. 15, Jones supported Prescott on whether the team’s QB1 had the potential to lead the team to a Super Bowl.

“Dak brings us the separator, now does that mean Dak will win every game or make every comeback or every key situation? Of course, you can’t answer that,” Jones said at the time. “But for the same reason, if you were considering the possibility of fighting for a Super Bowl, I would start right there with Dak on that team. He’s so important to us that we can really have the year we want.”

There could be an offseason shakeup in the Cowboys quarterback room, but Prescott is unlikely to be involved. With Cooper Rush set to act as free agency, Dallas is at risk of losing its backup quarterback to a team looking for a new signal caller.

Rush could find lucrative business elsewhere, but the more attractive landing spot would give the veteran an opportunity to apply to become a team’s first quarterback. Prescott has missed time in each of the last three seasons, making the Cowboys QB2 a position of particular importance given the star’s injury history.

It’s worth noting that Prescott was a major reason the Cowboys ended their losing streak in the road playoffs by defeating the Buccaneers in the wild card round. After selling Amari Cooper last offseason, the Cowboys’ receivers have been largely underwhelmed this season outside of CeeDee Lamb’s stellar game.

After flirting with Odell Beckham Jr., the Cowboys opted to sign veteran TY Hilton, who had not played this season prior to his arrival in Dallas. The Cowboys released James Washington after the wideout’s season was largely defined by a broken foot during training camp and rookie Jalen Tolbert had no effect in 2022.

“It’s been said/noted/brought up many times, but the Cowboys’ trade in Amari Cooper really doomed them,” writes the Blogging the Boys editor RJ Ochoa tweeted. “[Michael Gallup] didn’t give them a second play-making wide receiver like they had hoped. CeeDee had a wonderful season but was the only one who was explosive.”