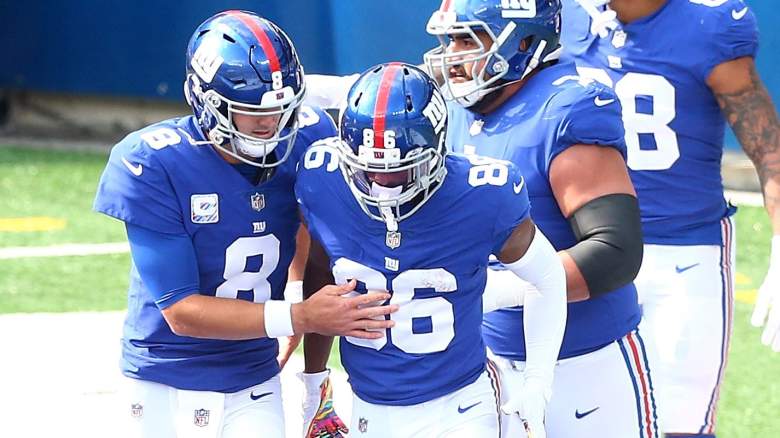 A capable pair of hands could go a long way for the Dallas Cowboys, and the team is being urged to consider an intra-divisional trade that would bring them New York Giants wide receiver Darius Slayton.

Slayton had a productive few seasons in New York to launch his career, amassing 48 catches, 1,491 yards and 11 touchdowns in his first two seasons with the Giants. But his performance took a hit last season when he missed four games and caught just 26 balls for 339 yards.

Slayton finds himself buried on the Giants depth chart and took a pay cut before the season to stay on the team. In two games, he only played four snaps and registered no catch.

That makes Slayton a prime trading target for a team like the Cowboys, who could use a receiver with proven league time on their resume. Bleacher Report pointed to Slayton and disgruntled Jets receiver Denzel Mims as players the team should be watching ahead of Monday night’s primetime matchup against the Giants. Alex Ballentine from Per Bleacher Report:

The Cowboys’ offense was dismal in the opener against the Tampa Bay Buccaneers, but made a step up against the Bengals last week, despite the fact that Dak Prescott was sidelined with a thumb injury.

Backed by a strong defensive performance, the Cowboys defeated the Bengals 20-17 in Week 2. The offense rushed for 337 yards in this matchup, with Cooper Rush occupying the QB starting spot. Offensive coordinator Kellen Moore seemed to get head coach Mike McCarthy’s message when it came to game calls.

“We just have to trust what we’re building and getting on our menu [to] adjust if you have change [the] Lineup and we’re definitely working on that,” McCarthy said ahead of the Bengals game. “And we want to make sure we’re helping, but maybe not being as conservative as you’d like to be.

“Let’s face it, Kellen was able to play very, very aggressively in his time as coordinator. But we are currently in a phase where we have to be a little smarter in certain situations. It’s all part of growing as a play caller.”

The Cowboys have put CeeDee Lamb in the role of No. 1 wide receiver with Amari Cooper now in Cleveland, and there’s limited proven depth around him to draw defense attention. After a disappointing two-catch performance against the Bucs, Lamb grabbed seven grabs for 75 yards against the Bengals. Noah Brown broke out with five catches for 91 yards and a Week 2 score, but no other receiver caught a pass.

Despite the lack of help, Cowboys owner Jones knew Lamb had to brace for more attention.

“People cover their best receiver. Happens. How are you? You have to play through being covered.” Jones said on 105.3 The Fan. “You have to catch balls covered. You say, “Well, that’s a hackneyed thing.” But you can’t not do plays just because you’re covered up.”

Thankfully, help appears to be on the way soon in the form of Michael Gallup after a cruciate ligament rupture he sustained at the end of last season. He was given a slew of assignments in practice this week, and the release of Dennis Houston suggested the team could prepare to add Gallup to Monday’s active roster against the Giants.

The Cowboys signed former Steelers wide receiver James Washington this offseason, but he is on injured reserve, recovering from a broken foot he sustained at camp. The sooner he could return to the lineup is for week 5.