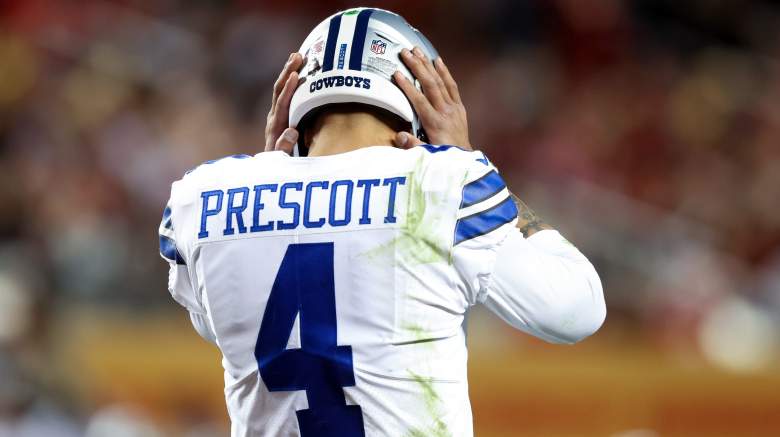 Dallas Cowboys owner Jerry Jones has almost guaranteed head coach Mike McCarthy will return next season, but things are less certain with the coordinators and assistants. Defensive coordinator Dan Quinn is among the hottest head-coaching candidates this hiring cycle, but it’s what the Cowboys will do with offensive coordinator Kellen Moore that could offer the most intriguing coaching change in Big D.

Moore has applied for the Panthers head coaching position and could keep Dallas from making a decision about his future if he’s able to land the Carolina gig. If not, the Cowboys could be looking to move away from Moore since the team has already backed McCarthy and Prescott has two more seasons left on his $160 million contract.

Given the way the Cowboys season ended offensively, it wouldn’t be a surprise if Jones at least considers moving away from Moore. There’s also the fact that McCarthy has inherited Moore as coordinator and could pressure the owner to finally bring in his own pick for an offensive assistant.

Pro Football Network’s Dallas Robinson believes the Cowboys could be looking within the division for their new offensive coordinator if Moore gets another job. Robinson points to two NFC East quarterback coaches as possible replacements: Giants’ Shea Tierney and Eagles’ Brian Johnson. Both coaches have helped their respective quarterbacks, Jalen Hurts and Daniel Jones, improve their games this season. Former Colts head coach Frank Reich is another name to keep in mind as the Cowboys look for a new offensive coordinator.

“Dallas might also be looking at outside OC options if Moore leaves, but a third of the league is looking for an offensive play caller,” Robinson wrote on Jan. 23, 2023. “A former head coach like Frank Reich or Nathaniel Hackett could do Sinn, or the Cowboys could target a quarterback coach like the Eagles’ Brian Johnson, the Giants’ Shea Tierney, or the Bengals’ Dan Pitcher.”

As former Cowboys scout Bryan Broaddus pointed out, replacing Moore is the easiest move for the Cowboys to use key offensive ingredients. Prescott has a no-trade clause that complicates any possible deal if the quarterback would be of value to opposing teams. The Cowboys have stressed McCarthy’s job security, leaving Moore as a possible option for a move in the hopes a new coordinator could help Prescott improve his game.

“I think there was a split between him [McCarthy] and Kellen about some stuff and maybe Mike had to be like, ‘Listen, I want to do it like this,'” Broaddus explained during a Jan. 23 episode of “Cowboys Break.” “And Kellen’s like, ‘Oh, okay, we’ll do that and we’ll see.’ If Kellen Moore gets an opportunity [with another team] that’s one way to take care of it [decision]. But I have a feeling there will be some coaches on the team who will say to them, ‘Listen, if you want to look for a job, go look for a job.’”

Quinn appears to be drawing much more interest than Moore in head coaching positions, and Dallas faces a tall order in trying to keep the defensive coordinator for a second straight offseason. Last year, owner Jerry Jones reportedly gave Quinn a hefty raise, which likely played a role in the assistant’s return.

The Cowboys’ defensive coordinator has exercised patience ahead of his next appearance as head coach. This year, the number of vacancies could deter Dallas from keeping Quinn, meaning the team would be on the lookout for a new defensive coordinator and likely several assistants. Quinn has had interviews with a number of teams including the Colts, Cardinals and Broncos.