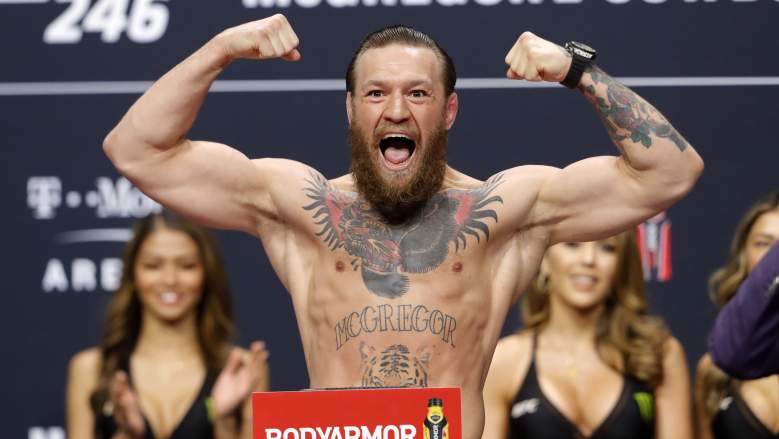 “Iron” won Saturday night at the Footprint Center in Phoenix, Arizona. And speaking to color commentator Joe Rogan after the fight, Chandler shared his interest in fighting the winner of the headlining event between Charles Oliveira and Justin Gaethje.

But if the UFC decides to go with someone else, the former multiple-time Bellator 155-pound champion has another idea. He’s looking to welcome welterweight McGregor back to the Octagon. Check out below via Twitter embed:

Shortly after Chandler’s challenge, the Irishman took to Twitter to respond. And McGregor seems interested in the fight.

“I’d have a nice knock off this guy, no doubt about it,” McGregor tweeted. “A fireworks spectacle. I also like the 170 scream. Knocked him over. I’m definitely ready to fight this guy at some point in my career. I see it happening after tonight. Congratulations on a solid win Michael and another barnstormer.”

Fans were able to see McGregor back in the Octagon in early fall. That’s what UFC President Dana White recently told SunSport.

“I have literally nothing for him right now, he’s not ready yet,” White said of the outlet. “The whole landscape could change over the course of the summer. We’ll see when he’s ready to fight. And when the doctor gives him 100 percent clearance, we’ll look at possible opponents.”

“We look forward to early fall when all goes well,” continued the UFC President. “If his leg heals properly and he gets clearance to really start training, then possibly an early fall.”

“Notorious” has made it clear that he no longer wants to drop to 155 pounds, which is probably why Chandler offered to take on the Irishman at welterweight. McGregor hasn’t fought since breaking his leg at UFC 264 in July 2021, and he’s at his best when he’s not exhausting himself to get to the lightweight division boundary.

“I’ve put myself on a light frame,” McGregor told The Mac Life’s Oscar Willis in March. “But I’m big now. I feel big, I feel strong, I feel healthy. You know I have good energy. I come back from a horrific injury.

“I don’t want to exhaust myself. I don’t need to exhaust myself. And I feel confident about it [UFC welterweight champion Kamaru] Usman. Jab happy sloppy orthodox wrestler without any submission. what will he do Where’s the danger here? I see no danger in him. His ground and pound is not strong. Also, he’s on the older side.”