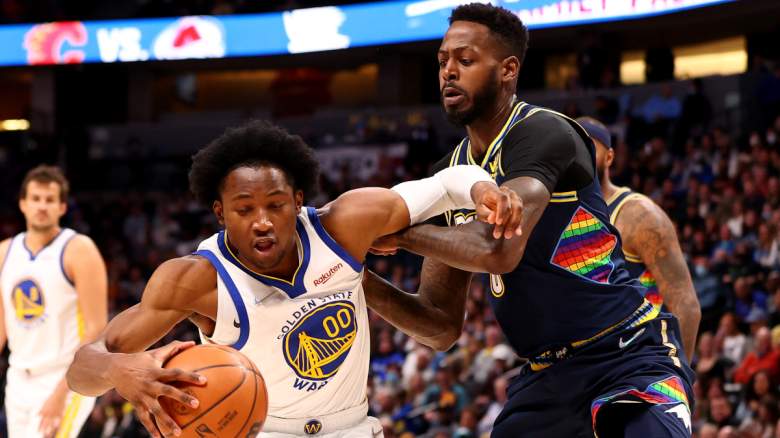 The Golden State Warriors may have started the summer by bringing another championship trophy back to bay, but just days after popping the champagne, the team clinched multiple Ls in quick succession.

We’re talking, of course, about the NBA’s annual free-agent craze, where there was a lot more giving than taking for the newly-crowned kings. While the dubs’ six founding members stayed in place, Steve Kerr’s bench was decimated when Otto Porter Jr., Gary Payton II and several others made the old peace.

It wasn’t all deduction for the reigning champions, however, as Bob Myers was able to inking two playoff-ready, battle-hardened vets in JaMychal Green and Donte DiVincenzo to recoup the team’s losses.

While both players appear to have something to add to the title defense, Kerr sounded particularly excited about the addition of Green when holding court with members of the media earlier this week.

Throughout his career, Green has been known as a player who isn’t afraid to mix things up and do all the little things that might not show up in the boxing score, but still make a big contribution to winning basketball. When asked about this aspect of Green’s game, Kerr made it clear that he relies on the baller to keep going.

“Excited to have JaMychal. I thought Otto Porter and Bjelica last year were such important players for our team, experienced players who just knew how to play the game. Good shooters. Smart screeners, rebounders, and that’s how I see JaMychal. He’s really an accomplished player,” Kerr said.

He’s particularly grateful to have Green around to support the tide of inexperienced youngsters – namely Jonathan Kuminga, James Wiseman and Moses Moody – that the team is trying to transition into bigger roles this season.

“Especially given that all of the youngsters on our team came off the bench, I considered JaMychal an important addition to our team and was so excited to have him.”

Though Kerr expects Green to help the kids on and off the floor, the reality is he and DiVincenzo will both fight her for minutes from the bench.

Based on his comments during the media session, it’s likely to be assumed that he feels the vets have a head start in this department. However, he is clearly looking forward to the competition between everyone in training camp and beyond.

“We have JaMychal and Donte who have played a huge chunk of rotations for great teams in this league. I have a lot of faith that they can come in and contribute at a high level and we have all these young people fighting for places. I’m looking forward to the upcoming competition.”

One thing that might help Green’s case: return to petting the three like he’s done in the past. After being at or near 40% of Deep for three straight seasons, the big man fell as low as 26.6% with Denver last season.