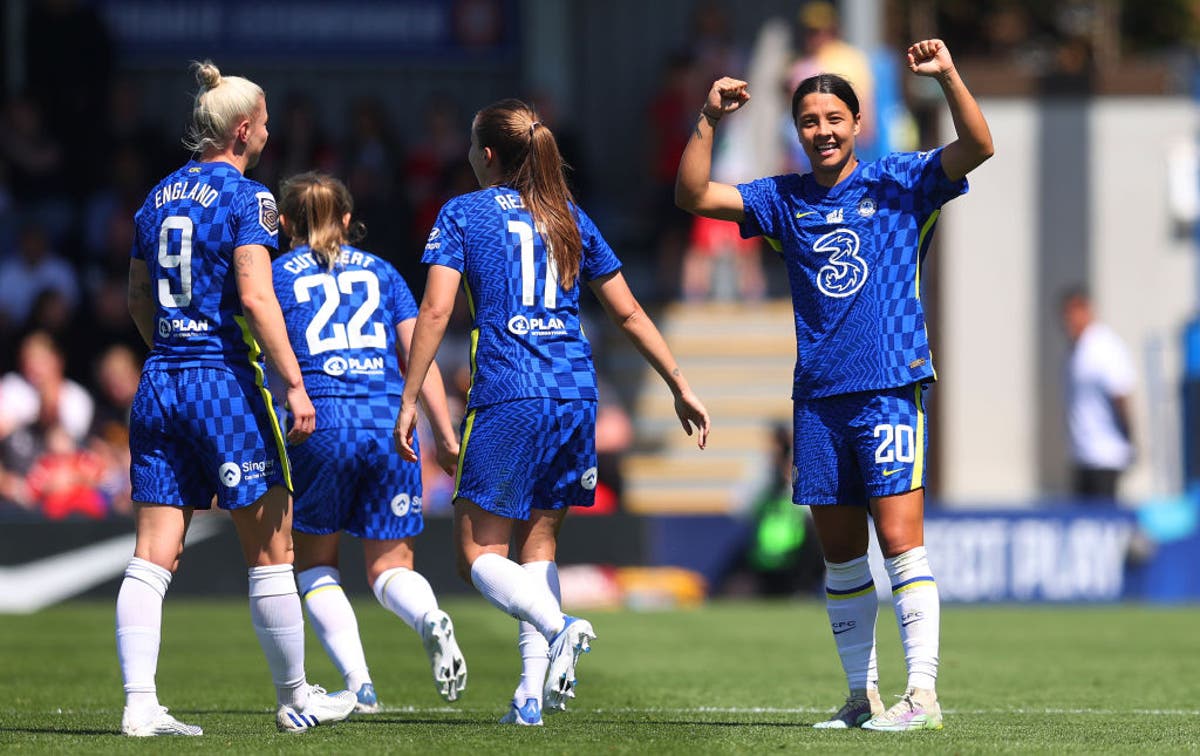 Chelsea have won a third consecutive Women’s Super League title after beating Manchester United twice in a row and beating rivals Arsenal by a point in a final day of suspenseful drama.

The title was in Chelsea’s hands but Emma Hayes’ side were 2-1 down at half-time after goals from Martha Thomas and Ella Toone stunned Kingsmeadow to put Arsenal top of the table.

But Chelsea responded immediately after the break when Sam Kerr and Guro Reit, two key players in their title campaign, put them ahead for the first time – before Kerr struck a fourth from 30 yards in what was perhaps the goal of the season.

It was a worthy way of winning the title, Chelsea’s fifth in six seasons, after a neck-and-neck race with Arsenal.

Arsenal played their part with a narrow win over West Ham and in the end they would have secured the title had it not been for a surprise 2-0 defeat by Birmingham City in January, which was the Gunners’ only defeat of the season season was.

It was a result that illustrated a wild and unpredictable campaign that lasted until the final day where the title was up for grabs and there were trophies at both Kingsmeadow and West Ham should there be a final twist.

Arsenal needed United to do them a big favor, although Mark Skinner’s side had a lot to offer themselves. They had been third in the table for most of the season but had been caught in the race for the final Champions League qualifying spot by a rising Manchester City. A win over Chelsea coupled with a Reading win over City would see United move up into the top three and while the odds seemed unlikely they gave themselves a fighting chance.

United had their moments early on to unsettle Chelsea – usually through deliveries from Katie Zelem – and struck twice in the opening half-hour to change the complexion of the afternoon. Thomas’ opener, a looping header from a Zelem free-kick, felt deserved and although it was quickly equalized by Erin Cuthbert, Toone’s deflected volley at the back post restored their shock advantage.

The current table saw Arsenal champions on goal difference when news of United’s lead reached West Ham with Jordan Nobbs and Anna Patten watching the game on a phone on the Arsenal bench. Reading’s result could also have gotten through to Kingsmeadow as City took a crucial step towards Champions League qualification through quick goals from Lauren Hemp and Bunny Shaw.

Chelsea had conceded just two goals at home all season before United arrived and had 45 minutes to salvage their title bid. It took them just 47 seconds to equalize as newly crowned Player of the Year Kerr produced another standout moment in their campaign. The striker scored a stunning volley from the edge of the box and there was going to be an even better shot.

Hayes had made two substitutions at the break, with Beth England and Ji So-Yun coming on, and both were involved in goals as Chelsea took the lead for the first time with their second goal in five minutes. Ji’s pass to Pernille Harder split the United defense and when the ball was put back on riding the Norway international scored another key goal in a string of crucial contributions.

It meant it now didn’t matter what Arsenal scored at West Ham, even as Stina Blackstenius put the Gunners ahead and then Steph Catley made it two. However, Arsenal will certainly feel that he let the title slip away and after picking up four points against Chelsea it was ultimately the points lost at Birmingham that made the difference.

They were inches away from a late winner in February’s 0-0 draw with Chelsea – billed as a potential title decider – and since then Chelsea have been flawless to end their season as champions with nine straight wins.

It would be sealed by Kerr, in a special WSL Player of the Season moment. A clearance from Mary Earps went to Kerr, who took the ball to her chest and threw a volley over the United keeper from 30 yards with her back to goal. It was their 20th goal of the season in the league, their 30th overall, and once again put Chelsea ahead of the pack.