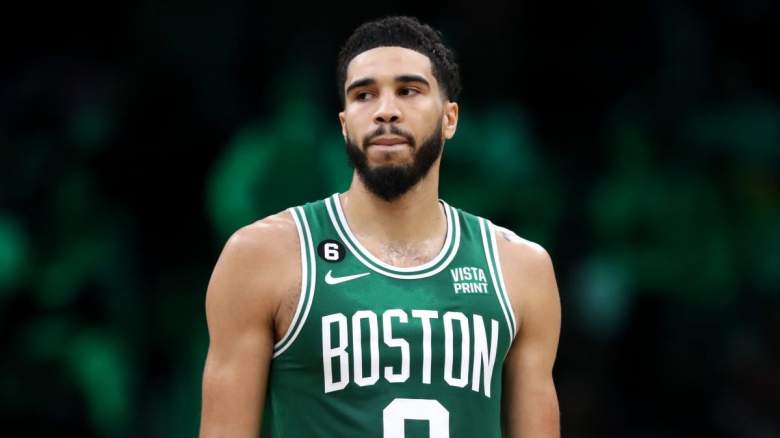 The Boston Celtics pulled off a big win Thursday night, defeating the defending champion. They defeated the Golden State Warriors in their second meeting of the season after getting a punk in the first on December 10 when the Warriors defeated them in San Francisco.

However, the hard-fought victory was not without setbacks. They made an incredible late game comeback and won in overtime, but Jayson Tatum played a ton of minutes. And now Tatum is out for Boston’s game against the Toronto Raptors on Saturday, Jan. 21. It will be only the third game he has missed all season.

Tatum has been struggling with a wrist problem all season. Earlier in the season after a win over the Detroit Pistons, the Celtics superstar revealed as much but also noted he was only coping with the injury.

“Same wrist, same hand, something different that we’re managing right now,” Tatum said on NBC Sports Boston. “Nothing that I need surgery, but something that bothers me. But just pick it up and get out there and keep playing.”

However, there’s a chance his impending absence against Toronto has more to do with the workload he’s taken on against the Warriors. Tatum scored a career-high in minutes, playing 48-07. He returned to the game early in the second quarter and played the entire quarter, third quarter, fourth quarter and overtime without resting.

But it resulted in a win for the Celtics, and despite a poor evening of shooting, Tatum recorded some solid stats. The superstar dropped 34 points, a career-high 19 rebounds, six assists and three steals on 9-of-27 shots from the field and 4-of-13 shots from behind the three-point line.

While Tatum’s late night and impressive stats were a highlight, nobody shone brighter against the Warriors than Al Horford. After the game, Jayson Tatum even questioned how old the 36-year-old tall man really is. (Joking, of course.)

“I was joking with Al. He came out looking like he was 25 today,” Tatum said via CLNS Media. “Two days off, I said he needs two more days in a row because he came out and set the tone, he really did. And we all chased it the rest of the night.”

Tatum and Horford’s dominance against the Warriors was momentarily put on hold when Jaylen Brown hit a game-changing three late in regulation time. It sent the game into overtime and helped Boston earn the win. After the game, Warriors head coach Steve Kerr opened up about his team’s defensive error.