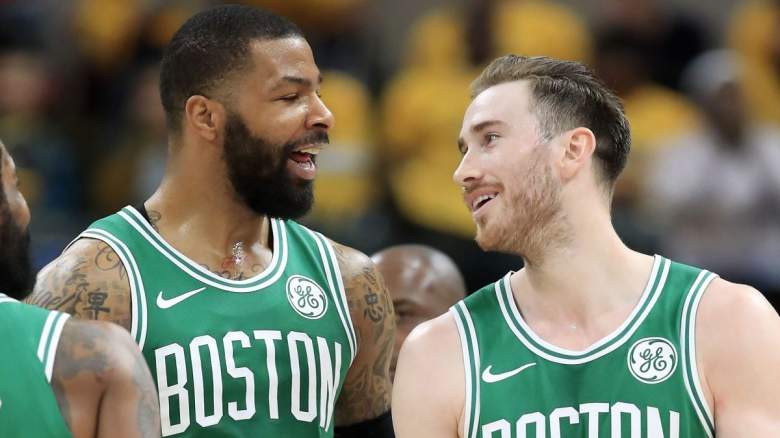 The Boston Celtics just wrapped up a very successful season in which they reached their first NBA Finals since 2010. However, now that the season is over, all eyes must turn to the off-season to find ways to improve the roster.

Boston won’t have a first-round pick in this year’s draft, having dealt theirs in the Derrick White deadline trade last season. However, they have a trade exception worth just over $17 million that they could use to add a high-quality rotary piece.

One name that has been raised as a potential trade target is former Celtic Marcus Morris. This idea was suggested by Yossi Gozlan from HoopsHype.

“Some players they could pursue with their trade exemptions are… ex-Celtic Marcus Morris. The Celtics have all of their future first-round picks up their sleeve and they’ve shown a willingness to trade them, trading one for Horford and another for White since Stevens took over,” Gozlan wrote.

Morris has spent the last two and a half seasons with the LA Clippers. Last year he averaged 15.4 points, 4.4 rebounds and 2.1 assists on 43.4% shots from the field and 36.7% shots from three-point range.

Despite his solid numbers, the Clippers are reportedly looking to trade him this summer.

On April 19, The LA Times’ Andrew Greif reported that the Clippers will likely attempt to trade with Morris this summer. With Kawhi Leonard set to return, the Clippers will have a wealth of wings on the roster.

“With Leonard returning and the possibility of Batum and Robert Covington also coming back, Morris could be seen as a valuable shot-maker, but ultimately an expensive redundancy amid a flurry of wings. The Clippers are widely expected to view Morris’ contract as a way to ease potential trades to improve the roster,” Greif wrote

Unfortunately for the Celtics, this could put them out of the running for Morris. If Boston made a deal for the forward, it would likely involve picks. Since they have the TPE, they wouldn’t need to adjust salaries, meaning they probably wouldn’t try to trade core players away. So if the Clippers just want to trade Morris for upgrades, the Celtics may not be their ideal trading partner.

And on top of that, the relationship between Morris and the Celtics isn’t as good as it used to be.

After entering free agency in 2019, Morris eventually signed with the New York Knicks despite wanting to stay in Boston. On top of that, Morris told the media that he never got a call from the Celtics.

But now there’s a new face running the show. Brad Stevens is in the front office and Danny Ainge is gone. Perhaps Morris’s relationship with Stevens is still good enough to make him want to return to Beantown.