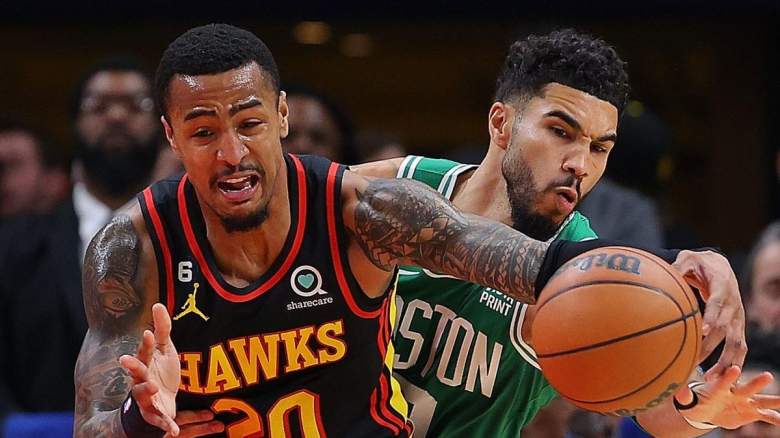 As of today, the Boston Celtics are pretty much at the top of the Eastern Conference table with a 34-12 record, which is also the best record in the entire NBA. That being said, the trade deadline is staring you in the face and you will have some decisions to make.

February 9th, this year’s trading deadline, is almost three weeks away, but given how well the Celtics have played, it seems relatively unlikely that they will make any major moves. However, one fan wrote in MassLive’s Brian Robb’s mail bag asking about a potential trade from John Collins to the Atlanta Hawks.

“What do you think of the deal for Atlanta’s John Collins? Sounds like its price has dropped significantly. We need more centre-back presence and at his age he’s on the same timeline as the 2 J’s. Trade a combination of Gallinari’s salary, along with Pritchard and Grant Williams, plus a few second-round picks and others needed for salary adjustment purposes.

“Or even a direct trade from D. White to Collins? Pritchard can then take most of White’s roles/minutes and would have another inside presence. Collins could then learn to be a much better player under Horford. Thanks Keith,” wrote one fan.

While the thought of adding Collins to an already-stacked Celtics roster might sound fun, the logistics of a potential deal made Robb shut down the idea almost immediately.

“It feels like Collins will soon be inducted into the Myles Turner Hall of Fame of annual trade inductees who never move,” Robb wrote. “However, they propose a couple of interesting hypotheses. His age and skills make sense for Boston, but his salary ($23.7 million) is a lot for what he does. The Pritchard/Grant/Gallinari/Filler package is likely something the Hawks wouldn’t bet on and would be difficult to pull off with the number of players involved (Atlanta would have to trade many other players to open up roster spots). I don’t see them going for something like that. A White vs. Collins trade is a fun debate, but it feels like the kind of deal both sides would say no to for different reasons. White has some of the best on/off numbers of any at the Celtics this year, and the team really needs their backcourt defense more than Collins’ scoring upside. On the other hand, I can’t see the Hawks trading a starter in Collins for white when they already have Dejounte Murray and Trae Young logging huge minutes in their backcourt. The Celtics haven’t been linked to Collins in trade rumors this year and there’s likely a reason for that. I can’t see them doing a major like that to disrupt their rotation.”

With all of Boston’s success this year, it seems extremely unlikely that they will decide to make the move at this point and if they were to land Collins on his current contract they would need to do just that to match the salaries.

The trade for Collins seems unlikely but the Celtics could still try to make a move. However, as noted by Keith Smith of CelticsBlog and Spotracthey just lost one of their trade items – Juancho Hernangomez’s TPE.

“Boston has a $5.9 million TPE from the deal with Dennis Schroder, which expires on February 10.

“Celtics also has a $3.2 million DPE for Danilo Gallinari. That will last until March 10th,” Smith tweeted.

Additionally, it seems unlikely that the Celtics will even decide on a trade this year. According to Smith, the Celtics plan to remain active in the buyout market rather than the trade market.

“Various sources told CelticsBlog that they expect Boston to be a top destination in the buyout market,” Smith wrote for CelticsBlog. “A source said, ‘You don’t have to make a trade. Why bother? You don’t need anything. brad [Stevens] already gave Joe [everything he needs]. And this Gallo [Danilo Gallinari] exception [Disabled Player Exception] will allow them to outperform all others for a buyout type. You can let the deadline pass and then just pick the best free agent(s) for the playoff depth. And vets will all want the Celtics because they get paid and they can win.’”