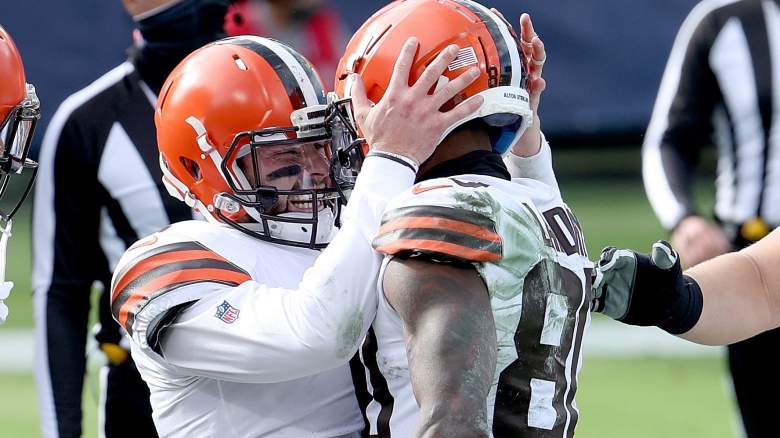 The Cleveland Browns have yet to find takers for quarterback Baker Mayfield, but veteran offensive lineman Joel Bitonio is confident the former top pick will find a new home and land on his feet.

Bitonio is the longest serving member of the Browns and a leader in the dressing room. He was there before the Mayfield era and still remains a key element of Cleveland’s stellar offensive line. Referring to Mayfield as “my man,” he showed support for his former QB through the difficult time and recalled some of the better moments of their time together.

“Baker is my type. I still remember Thursday night’s Jets game when he came in and led us to the win. It was honestly one of the special moments of my career because it had been so long since we had won games.” Bitonio told reporters on Wednesday. “He’s a tough guy and he plays hard. He played his heart out for us and I will always respect that. He’s still a friend of mine and we text occasionally. I think like everyone else he’s waiting to see where he’s going. Baker has done a lot for this franchise. He won a lot of games and was a great player for us.”

Mayfield has a career record of 29-30 as a starter but will always be remembered for helping lead the Browns to their first playoff win in more than a quarter century.

The trade market was slow for Mayfield, due less to his talent and more to his lofty contract and the Browns’ lack of leverage to close a deal.

Bitonio believes this whole situation will only fuel Mayfield, who loves to prove his critics wrong.

“He’s always had that chip on his shoulder and I’m sure it’s only going to get bigger and bigger,” Bitonio said. “A team will give him a chance. I know that the contract situation will take care of itself. Quarterback is so rare in this league that he will have a chance to play and perform.”

Mayfield has been exempted from mandatory minicamp as the Browns look for a trade.

As the end of the offseason programs nears, there is a sense of urgency in the Panthers camp to strike a deal, according to Jonathan Jones of CBS sports.

“As minicamps begin today for the Browns and Panthers, trade talks between the teams led by QB Baker Mayfield continue, according to sources. The main issue remains Mayfield’s salary and how much (or how little) teams pay,” Jones tweeted. “The urgency on Carolina’s side is to close the deal soon so Mayfield can spend some time at minicamp with the Panthers. For the Browns, it’s the best deal they have. Conversations are ongoing.”

The sticking point was Mayfield’s nearly $19 million salary, which the Panthers want the Brows to eat most of. They negotiated a deal around the draft, but Carolina wanted the Browns to pay $13 million to $14 million of Mayfield’s salary, according to the Charlotte Observer. There’s a chance the Browns will increase that number to close a deal, or the Panthers will come to terms with the fact that they don’t have what they need in their QB room and pull the trigger.