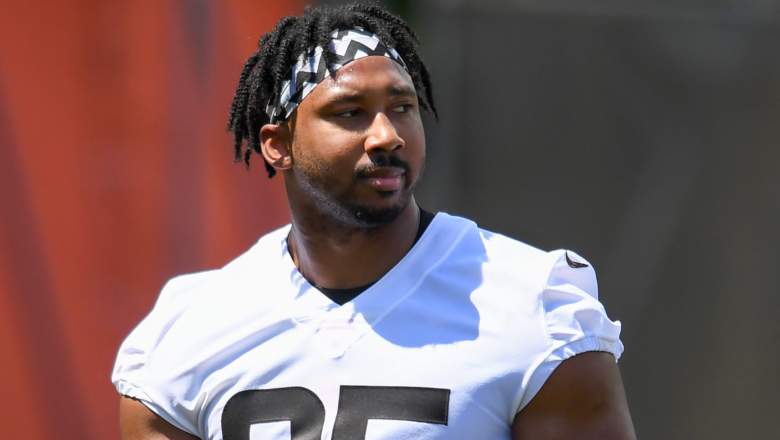 Perrion Winfrey was a healthy scratch for the Cleveland Browns’ matchup against the New York Jets but is expected to be back on the field Thursday.

Winfrey felt the wrath of his coaches and defensive star Myles Garrett last week for his behavior, which was deemed unprofessional. While the team never revealed the issue, Orange and Brown Report’s Brad Stainbrook said it had to do with Winfrey being repeatedly late for practice.

Garrett took it upon himself to call out the rookie after being pulled from practice for disciplinary reasons.

“I think we all need to stand up and say something, but sometimes silence speaks louder than words.” Garrett said Sept. 16. “We’ve used our voice a few times and at the end of the day he needs to learn how to be a pro. Kevin [Stefanski] took matters into his own hands and he felt it was the right thing to do and I fully support my coach’s actions.

“It was pretty common knowledge. And it was easy to see. It wasn’t like we had to bring it to his attention. It was just that his actions were very obvious.”

Winfrey is expected to be back in action against the Steelers this week and spoke to reporters about being a healthy scratch and missing out on valuable practice time.

“I just feel like it was something I needed to mature,” Winfrey said. “I feel like I wouldn’t be the player I will be now if it hadn’t happened, so I’m glad it happened. I think everything happens for a reason.”

Winfrey, a fourth-round pick by the Browns in this year’s draft, is expected to become a key element of the defensive tackle rotation, which is already a weak point for Cleveland due to a lack of proven elements.

Winfrey played two years at Iowa Western Community College, after which time he was ranked the No. 1 junior college recruit in the country. He ended up in Oklahoma, where he became a key element of the defensive line. Named a second-team All-Big 12 Conference pick in his senior year, he posted 23 tackles, 11 for losses, with 5.5 sacks in 12 starts.

What made Winfrey truly unique and a fast fan favorite was his mentality and his immediate love for all things “Dawg Pound”. He’ll have to work hard to get out of the kennel, but don’t expect his intensity to change.

The Browns could use all the help they can get on the defensive line, with injuries surfacing after Week 2. Defensive end Jadeveon Clowney has already been ruled out, while backup Chase Winovich has been placed on injured reserve, meaning he will be out for at least the next four games.

Of more concern, Garrett missed practice on Tuesday and Kevin Stefanski wasn’t sure he would be ready for a short week.

“In these games on Thursday evening, it’s sometimes difficult for the boys to make it,” said Stefanski. “We’ll take each lesson as it comes.”

With Clowney out, third-round pick Alex Wright will pull the start for Cleveland against the Steelers. Isaiah Thomas is currently the only other defensive end on the active roster, which will likely result in Isaac Rochell being called up from the practice team.