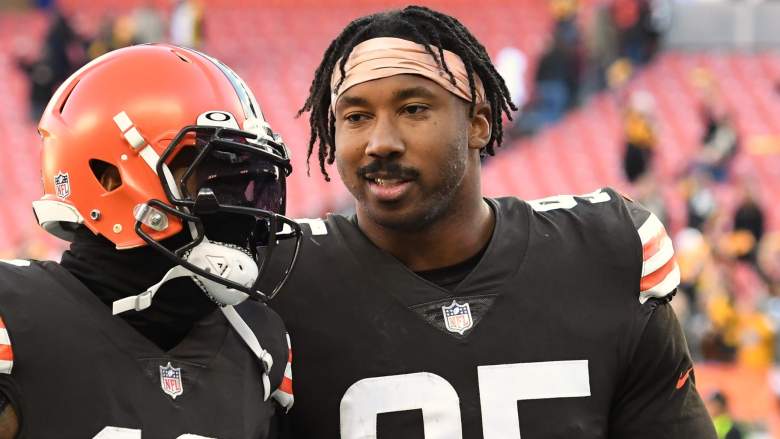 Myles Garrett appeared to shoot a shot at the Cleveland Browns coaching staff after the team’s 45-7 loss to the New England Patriots on Sunday, leading to a situation he and head coach Kevin Stefanski discussed.

The Browns were split by rookie Mac Jones and backup running back Rhamondre Stevenson, dropping more than 33 points for the fifth time this season.

“I think we didn’t counter the way we should,” Garrett said. “We didn’t stop the bleeding and they continued to attack where we were deficient.”

Stefanski said he spoke to Garrett about his comments but did not reveal any details about what was being discussed.

“Every time you have a game like this there is a lot of frustration,” Stefanski told reporters on Monday November 15th. “I spoke to Myles about it and I will have this conversation between Myles and me.”

Stefanski admitted that everyone needs to get better, which is obvious with such a one-sided score.

“Again you give up 45 and you get seven, we just didn’t have a good plan, we didn’t make enough adjustments and we didn’t play well enough,” said Stefanski. “It’s all of the above when you get hit.”

While there were certainly some things the coaching staff could have done to help, there were many blame on the Browns after the blowout loss. Brown’s linebacker and locker room manager, Anthony Walker, responded to Garrett’s comments, and while he disagreed, he was a little more diplomatic.

“I think Myles speaks more than the whole team, we didn’t play well. I think that was his main thing. We didn’t play well enough as players. Of course, the coaches will say that they could have done some things differently. At the end of the day we lost the game, ”said Walker. “We have to flush it and move on. Myles is a leader at the end of the day. He’d probably be a captain if we had captains. Everyone looks up to him. He understands that. He owned it himself. We all own it. We have all contributed to this loss and we need to repair it. “

The loss halted the momentum the Browns had gained in their own blowout win over the Bengals a week earlier. You need to turn around quickly now to stay in the AFC in the playoff race.

“I hate to lose. All losses hurt the same. Whether we lose 3-2 or 100-0, whatever it is, it hurts. It hurts to lose, ”said Walker. “You have invested so much time, energy and effort, but that’s one of the reasons why we’re playing this game. That’s what we signed up for, are the ups and downs. We cannot ride the wave of emotion. We have to stay involved in the process. “

The Browns have another chance to change things this week when they battle the winless Lions.