Browns’ Brissett Sounds Off on Injury, Status vs Steelers on Short Week 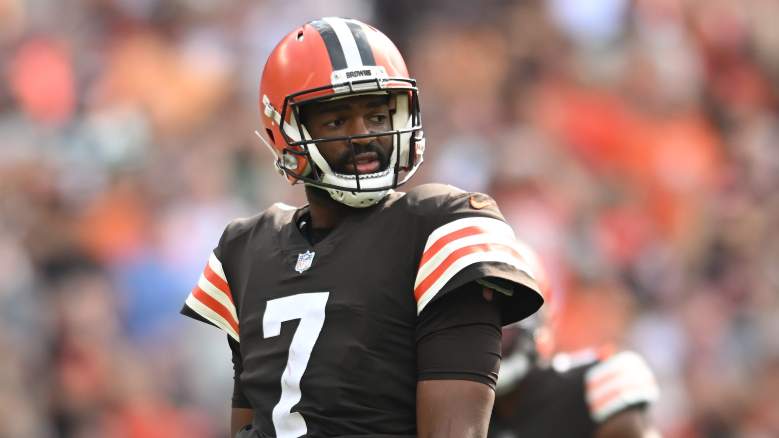 The Cleveland Browns added injury to the insult on Sunday, announcing two troubles with key players on both sides of football after squandering a 13-point lead against the New York Jets late in the fourth quarter.

Edge rusher Jadeveon Clowney was the first to hit the deck and sustained a non-contact ankle injury early in the game. Then, just over four minutes from time in the final stanza, Browns quarterback Jacoby Brissett was sacked by Quinnen Williams and Carl Lawson, who sustained an ankle injury himself.

Brissett was slow to get up and visibly hobbled after the game. However, the QB returned to the field for the next drive. Ultimately, it didn’t matter as the Browns gambled away a two-point lead with less than two minutes to go, falling to 1-1 on the year.

Cleveland’s quarterback spoke to reporters after the collapse and addressed the severity of his injury as the Browns prepare to play the Pittsburgh Steelers on Thursday after a short week.

“I’m going to be fine for sure,” Brissett said when asked if he would be ready to face Pittsburgh on Sept. 22.

He added that while he did experience ankle pain when he returned to the field, that return itself was never in question.

While Brissett has been blunt about starting under center against the Steelers, Clowney’s status is more up in the air. The edge rusher also limped from his injury but struggled to the medical tent before eventually making his way back to the locker room.

Clowney’s original determination to return was questionable, but he was ultimately ruled out. He was later seen leaving the Browns’ facilities in a hiking boot, per Camryn Justice from WEWS.

Myles Garrett, Clowney’s pass-rushing partner, spoke about his absence following the defensive meltdown that saw the Browns snatch defeat from the clutches of victory.

“He’s a tenacious rusher and plays the run very well. Missing his presence is huge.” Garrett told the media after the game. “They saw that and attacked us a little differently. I can switch sides, but they don’t have to worry about us both screaming out of control.”

That wasn’t all Garrett had to say after Sunday’s game. The All Pro Pass Rusher claimed responsibility for the loss as the defensive and special teams were primarily to blame for the collapse.

“It’s difficult. We gave up defence. We gave up as a team in the 11th hour,” he said. “When someone points the finger at me, I point at myself because I know I could have done better. I think every man in this dressing room should do it [point the finger at themselves]including trainer.”

However, Garrett also made an odd decision to call out to Browns fans who had booed the team after its unlikely late loss to the Jets.

“The more disappointing thing was the booing at the end. It wasn’t the best ending,” Garrett continued. “These guys are still putting their ass on the line and playing as hard as they can and as such they should be respected. It’s two games and we have a lot more to do.”

“The more disappointing thing was the booing at the end. It wasn’t the best ending,” Garrett continued. “These guys are still putting their ass on the line and playing as hard as they can and as such they should be respected. It’s two games and we have a lot more to do.”