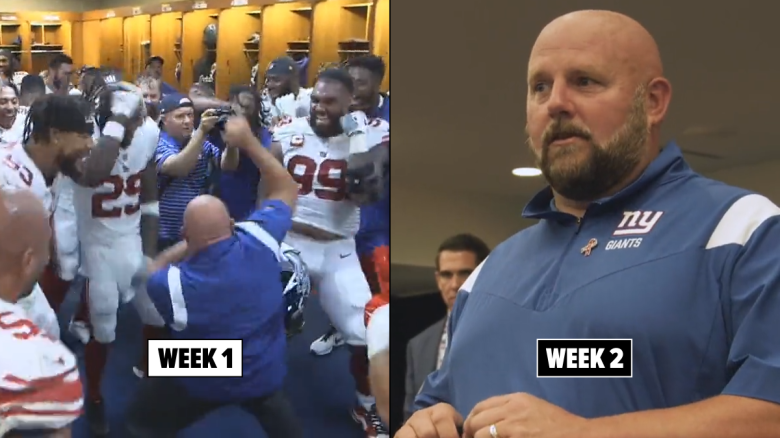 The Brian Daboll era is only a few weeks old, and the New York Giants are already stacking wins under their first-year head coach.

While Daboll started his NFL head coaching career with back-to-back wins, his demeanor in the locker room differed drastically after each of those wins. This was the scene in Nashville last week after the Giants came back to beat the Tennessee Titans 21-20 on the road (with some commentary from running back Saquon Barkley):

Daboll’s message after New York’s 19-16 win over the Carolina Panthers had a very different tone. Instead of celebrating unfiltered, he gave his team a sobering message: “It’s going to be a long, hard road.”

“Good win. Wins are hard to come by in this league,” said Daboll. “We have a shabby bunch – okay? – that doesn’t waver. And you appreciate that. We don’t waver. Good? It’s going to be a long, hard journey. It is. For all of us. OK? And the result is great. I love it. But remember – if we lost that game, it’s still about our preparation and our process. OK? Our preparation and our process.”

The week 1 dance party was justified for several reasons. It was Daboll’s first career win, and his Giants were 5.5-point underdogs against the Titans on the road. The mood after their Week 2 win over the Panthers was very different. Expectations are rising and the game has had its ugly moments. In addition, his boss, general manager Joe Schoen, sat over his shoulder in the dressing room during the speech.

While Brian Daboll was calm and composed in his post-game press conference, that wasn’t always the case during Sunday’s game. For the second week in a row, television cameras saw him screaming on the sidelines.

That moment came after the Giants’ second straight drive ended in a field goal early in the game:

In Week 1, Daboll had a heated exchange with quarterback Daniel Jones after an interception in the end zone.

Daboll has good reason to be frustrated with the offense. Jones made some mistakes and Saquon Barkley seems to be the only explosive playmaker. Barkley was limited to 3.4 yards per carry against the Panthers and Jones failed to surpass 200 yards for the second straight week. It’s hard to see how Jones can truly thrive on this offense given all of the uncertainties he and the Giants are currently dealing with at wide receiver.

While Sunday’s offense was sluggish, kicker Graham Gano and the Giants’ defense came to play against the Panthers. Gano hit all four of his field goal attempts plus an extra point. He hit a 51-yarder early in the fourth quarter and then pinned the eventual game-winner from 56 yards with 3:34 left in regulation.

Defensive coordinator Wink Martindale, meanwhile, drafted a game plan that limited the Panthers to two third-down conversions on 12 tries and just one touchdown on four trips to the red zone. The Giants defense fired Panthers quarterback Baker Mayfield twice, including one from safety Julian Love, which helped put the game on hold late in the fourth quarter.