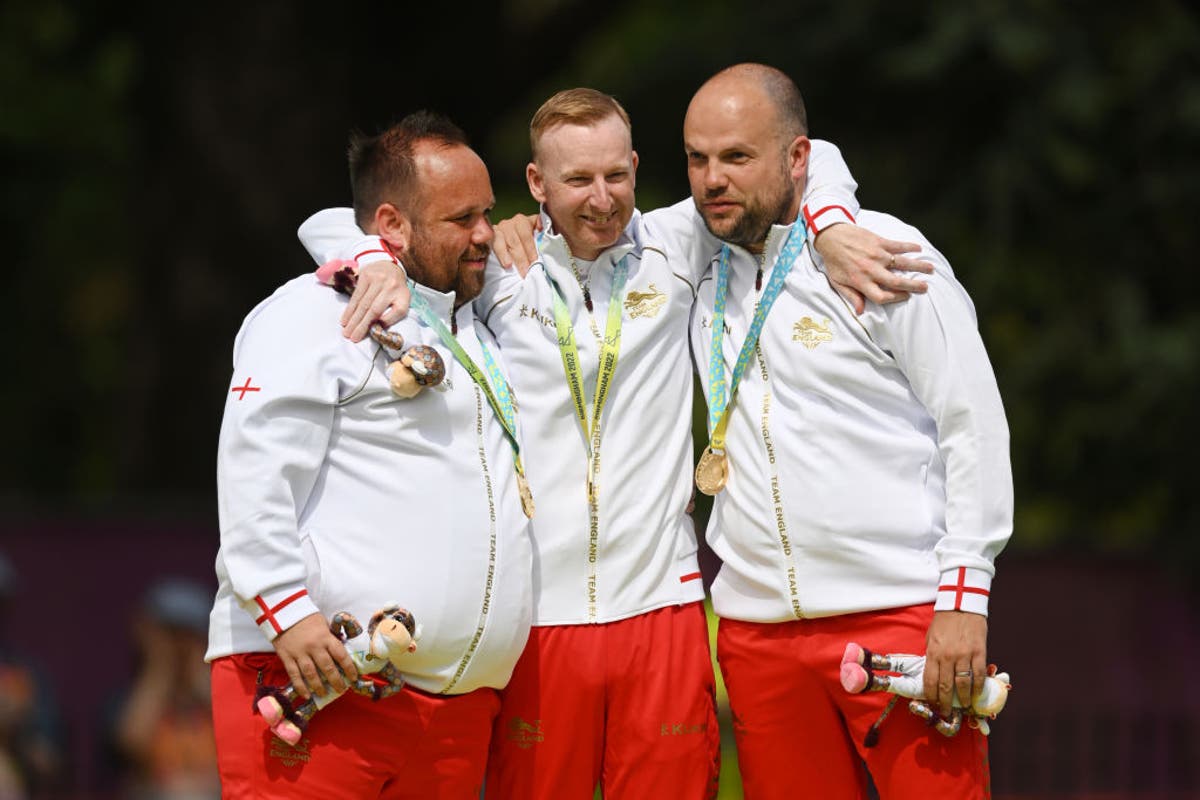 String quartet covers and polite applause are not the usual soundtrack to England v Australia.

We’re used to seeing fierce battles in hostile environments like the Homebush or the Gabba where no Pom is welcome.

The picturesque setting of Victoria Park in Leamington Spa, the spiritual home of the lawn bowls, was the setting for the latest iteration of the rivalry as England’s Nick Brett, Louis Ridout and Jamie Chestney won gold in the men’s treble at the Commonwealth Games.

You would have a hard time finding three more normal guys than these three.

The comparison to their Australian counterparts was stark – bleach blonde hair, a tradition for reigning Commonwealth champions – that wouldn’t look out of place on Bondi.

There’s nothing normal about Brett’s ability to create scoring chances and bend bias to his will.

He was the last man to make the sport go viral with his “Wonderbowl” being watched by millions within hours in 2019.

The 48-year-old official pulled out footage at Leamington Spa that far surpassed the Bowl, which dubbed him the “Brad Pitt of Bowls,” and now Brett hopes he’ll be better known as a Commonwealth gold medalist.

“[It feels] absolutely outstanding,” beamed Brett. “One of the best feelings I’ve ever had in the game.

“We all have bucket lists; Gold medal at the Commonwealth home games is on the list.

“Playing with these two who played fantastic is there too – they were outstanding.”

The English trio delivered a masterclass in three-point play to take a 12-1 lead after nine ends, but England versus Australia is rarely that easy and the Aussies came back 12-12 with two ends to play.

But when the momentum seemed to run out with the Australian trio of Barry Lester, Carl Healey and Ben Twist, Chestney kept his cool and delivered two fantastic draws to win the last two ends by one shot each and take the gold medal with 14- 12 up for grabs in the most dramatic of circumstances.

“It was emotional, up and down, getting over the line – there’s no other feeling like it, it’s the best moment of my career.

“I also just saw my daughter Eliza, which brought tears to my eyes. Having your support is fantastic.”

All eyes were on Chestney on the 17th end as he had the last bowl to land to keep Australia from going forward, but the Devonian refused to feel the pressure.

“I’ve stayed positive,” Chestney added. “I just didn’t feel like we fell off that much.

“Australia played a lot better in the second half but we didn’t lose our heads and hoped for a chance, luckily on the 17th end.”

The victory and drama of these last two finals is an outcome that could catapult the normally low-key sport of bowling into mainstream public awareness.

Throughout the competition, the trio was cheered on by the at times vociferous crowd support. The audience erupted in cheers at the end as Chestney hugged a bouncing board in mid-air.

And while the atmosphere might not have been like what Millwall fan Ridout is used to at The Den, he lauded the importance of home support.

“Bowling isn’t usually the sport with the biggest or loudest cheers, the atmosphere was brilliant and definitely gave us that extra boost,” added Ridout.

“The audience was fantastic; the atmosphere was awesome. Hopefully that put Bowls in a good picture and pushed the sport forward.”

There has never been a better time to discover bowling, truly a sport for everyone. It’s all to play – discover more below www.bowlsengland.com