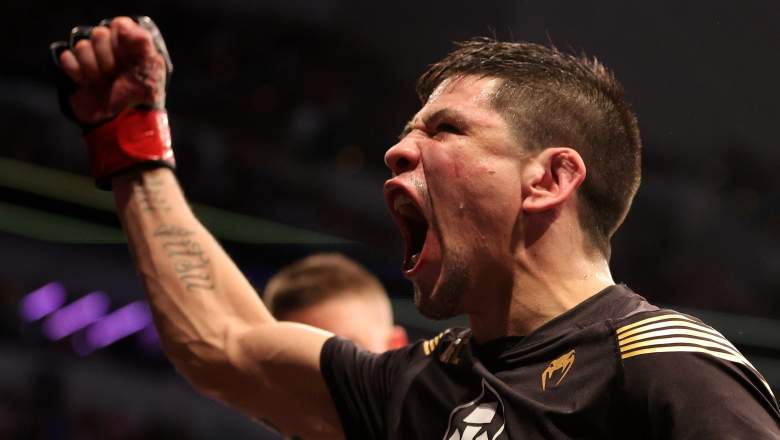 The first quadrilogy in UFC history came on Saturday night when Deiveson Figueiredo fought Brandon Moreno for the undisputed flyweight title. The two met at the Octagon for the co-main event of UFC 285 in Rio de Janeiro, Brazil.

They were 1-1-1 going into the fight and Moreno put a stamp on the rivalry. He took his 125-pound belt back after the third round when the cage doctor stopped the fight with a swollen eye suffered by Figueiredo courtesy of Moreno’s punch.

Well, Moreno, who was born in Mexico, received no love from Brazilian fight fans who attended the event at Jeunesse Arena. Boos rained down on “The Assassin Baby” while speaking to UFC color commentator Daniel Cormier. And when Moreno left the cage, he had to run to the exit that led backstage while being shielded by security guards.

Drinks and other objects aimed at Moreno were thrown from the stands and you can watch the video below via Bloody Elbow’s embedded tweet:

Speaking to Cormier, Brazilian Figueiredo announced he was going up to 135 pounds, a division jump he’s teased for years.

Many members of the MMA community took to Twitter to give their opinion on the UFC 283 co-main event. Former bantamweight and flyweight champion Henry Cejudo tweeted: “@Daico_Deiveson will be a savage at 135. Congratulations on an amazing run at 125. The god of war will be back.”

The MMA Hour host Ariel Helwani tweeted, “If they hadn’t already fought four times, you could convince one more time, even though Moreno is on top. Just feels a bit abrupt. But fifth place is hard to sell and not fair to the division.”

“I’ve never seen anyone take their gloves off to announce a weight class change,” Helwani tweeted. “Gave us a fright, Figueiredo. My goodness.”

Morning Kombat host Luke Thomas tweeted: “Brandon Moreno wins the UFC flyweight title with a stoppage after the third round. Doesn’t look like an eye prick or scratch to me. Moreno closed that eye with a leap near a gazelle. He was better in that moment AND overall. And new.”