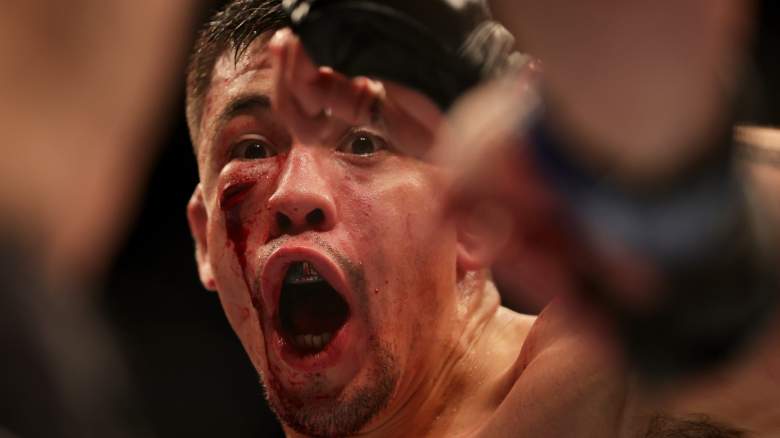 “The Assassin Baby” and Figueiredo battled to unify the 125-pound belt at UFC 283’s co-main event in Rio de Janeiro, Brazil. And Moreno prevailed after the fourth round due to a doctor’s interruption. In addition to winning the four-fight rivalry (2-1-1), Moreno picked up gold from “Deus de Guerra” and improved his professional mixed martial arts record to 21-6-2.

Moreno’s head coach Sayif Saud, who trains fighters at Fortis MMA in Dallas, Texas, appeared on MMA Fighting’s “The MMA Hour” Monday to celebrate The Assassin Baby’s victory. And during his chat with Ariel Helwani, Saud revealed Moreno had a tough training camp – and it wasn’t just affecting his knee.

“Brandon had a lot of adversity in that camp,” Saud said. “Brandon hurt his knee really badly and we kept it a secret. No one knew about it and he not only had to deal with all these other things, but physically as well [as well].

“Last month he got really sick. He has this flu [that was going around] and for two weeks he was so ill. He did laps, chopped shit, blew his nose and said, ‘Yes sir, yes sir,’ but he fought.”

Saud praised Moreno’s tenacity and heart and said that nothing would have stopped him from entering the Octagon on January 21st. “It was serious,” Saud said. “It banged, but this guy fought with one leg. There was never a time for Brandon when he wasn’t fighting. That’s the spirit of a champion.

“But we worked through it. I let him tape his knee [every day]and thank god we made it.

“He has never shown any mental weakness or mental exhaustion,” continued the Fortis MMA head coach. “The guy is just a tank so we just went through everything and there were some weak moments. I had to keep my balance to make sure he didn’t injure himself more. This guy will run through a wall, he’ll do whatever it takes.

“A lot happened in the camp, even if it was a short camp.”

Moreno lost his head coach James Krause weeks ago after the fighter-turned-coach was investigated over a betting scandal. Because of this, along with the injuries, Saud said Moreno’s manager James House suggested that Moreno pull out of the fight. But Moreno and Saud decided to move on.

“I told him, ‘It’s the first week, calm down, take a deep breath,'” Saud explained. “He was just so freaked out and the truth was, and I’ve known Jason for 10 years, I had never seen him like that. He cares about Brandon so much he didn’t want him to fight and if Brandon doesn’t fight Jason doesn’t get paid at all.

“The only reason I thought Brandon could fight was because I could see the mindset, and I was like, ‘This boy can overcome that. We can do this. We can really do this. Not only will we do this, we will do it well.’

“I believed in Brandon, I believed in everyone as a team, all the coaches worked so hard for that. Everyone was engaged like a family.”