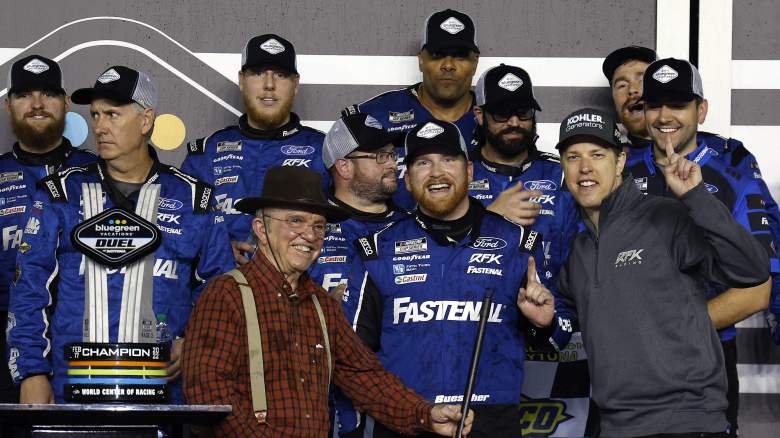 “Chris is a great racer,” Keselowski told PRN’s Garage Pass. “If we give him the equipment he needs to be up front, he will win races. Chris Buescher and Ross Chastain are so alike. It’s just a matter of putting them in the right gear.”

Keselowski made the comments during the race weekend at Dover Motor Speedway. Buescher became the talk of the town after setting the fastest lap time in qualifying and capturing the first Busch Light Pole of his career. He continued those efforts and finished eighth overall after 18 laps in the lead.

For Keselowski, Chastain is no stranger to Cup Series competition. He has started 126 races at the highest level of competition. However, there was a noticeable change in his performance as he switched to better equipment.

The Florida native entered the 2021 season – his first with Chip Ganassi Racing – with 79 career starts and just one top 10 finish, which he secured at the 2019 Daytona 500. a total of eight top 10 finishes and the first three top five of his career.

Chastain has only improved on those numbers while adjusting to the Gen 7 cars and working with Trackhouse Racing, which includes numerous former CGR employees. In the first eleven races he has already achieved seven top five finishes and the first two wins of his career.

The Texas native is only 11 races into his debut season with Keselowski as his teammate, but he’s made some positive progress. He’s secured three top 10 finishes, putting him in position to surpass his career best of eight (2020, 2021) and he’s qualified well.

With practice and qualifying sessions returning for the full 2022 season, there are more opportunities for drivers to set themselves up for success. Buescher has benefited from this at several circuits with three starts in the top five.

Buescher started his season with the fourth fastest qualifying time at Daytona International Speedway. He repeated this feat at Martinsville Speedway and then captured the first Busch Light Pole of his career at Dover. Buescher also secured top 15 starts at Atlanta Motor Speedway and Bristol Motor Speedway (dirt).

The season is only 11 races deep, but Buescher has an average starting position of 16.5. This is the best mark of his career right now, but he still needs to qualify well to keep himself in the front half of the lineup every week. Equipment will be just as important, though, as noted by Keselowski.

The No. 17 driver has made 233 starts in his career in the Cup Series – 227 as a full-time driver. He didn’t make victory lane as the No. 17 driver, but he does have an earlier win from his rookie season.

Buescher conquered the Pennsylvania 400 at Pocono Raceway in 2016 while driving for Front Row Motorsports. He took the No. 34 Ford into victory lane after leading 12 laps. However, this was anything but a normal race.

The rain initially postponed the Cup Series race to Monday August 1, which also happened during Buescher’s 2022 trip to Dover Motor Speedway. The drivers were able to complete 138 laps, but the weather once again played a role.

Buescher jumped to the front of the field after Kyle Larson drove down the pit lane to make a green flag stop. Dense fog then forced NASCAR to raise the red flag. The drivers stood around for 80 minutes before officials declared the race official with 22 laps remaining. Buescher won his first career race and positioned himself for the playoffs.

The rain initially postponed the Cup Series race to Monday August 1, which also happened during Buescher’s 2022 trip to Dover Motor Speedway. The drivers were able to complete 138 laps, but the weather once again played a role.