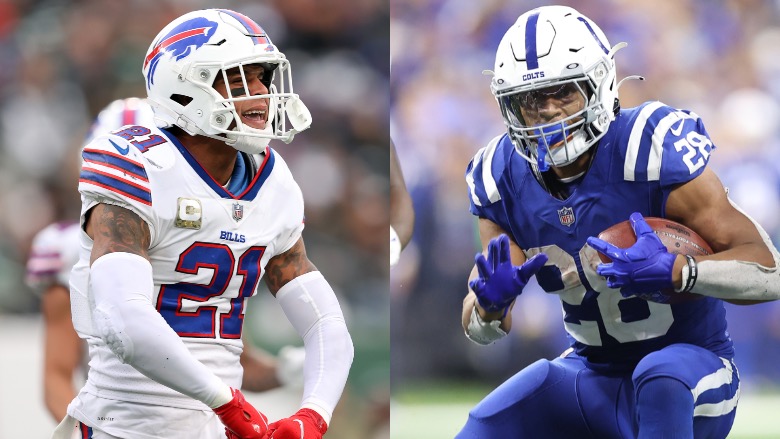 After a dominant 45:17 win over the New York Jets, the Buffalo Bills aim to continue gaining momentum against the Indianapolis Colts in Week 11. Streak Buffalo’s defense must find a way to keep Jonathan Taylor from running back.

ALL the latest Bills news straight to your inbox! Take part Heavy on Bills Newsletter here!

Taylor, who has scrimmageed at least 100 yards in each of the Colts’ last seven games, is hard to stop. The 22-year-old Wisconsin alum leads the league in rushing (937) and ranks second in the NFL in yards per carry (5.8) per bills wire.

Everyone also does more than just run the ball. He is third on the team at receptions (29) and reception areas (303). He’s also runner-up in rousing touchdowns (9). Hence, it’s easy to see why Bill’s defense is focused on stopping Allen, especially Jordan Poyer, who has obviously been studying his tape all week.

Poyer believes Allen is superior to the Tennessee Titans star, who is considered the # 1 rusher in the NFL.

Slowing Taylor down will be critical to the success of the Bills in Week 11, so it’s incredibly unfortunate that much of their No. 1 line of defense in the league won’t be in full strength.

The jury is still open to linebacker Tremaine Edmunds, who did not train on Thursday but was restricted on Friday. However, Bill’s defensive coordinator Leslie Frazier is confident his players can do the job with veterans Poyer and Micah Hyde at the helm.

“They are also very smart players who are very proud and committed to getting better,” said Frazier. “And when you have people who are good athletes and have that kind of commitment, you have the chance to see maturation over time. And now that you have become familiar with this system, you are at the point where you can stand up and really teach some of the principles of our defense strategy. “

“That’s how you know the defense,” Frazier continued. “And that’s part of being together for five years, and they feed on each other. And they make it really difficult for quarterbacks to look at them sometimes. “

The last time the Bills took on the Colts was during last season’s playoffs. On January 9, Buffalo defeated Indianapolis just under 27:24 to win the AFC East Wild Card Matchup. The Bills could have lost late in the fourth quarter, however, when Colts’ then quarterback Phillip Rivers tossed a Hail Mary pass in hopes of a game-winning catch, which luckily was deflected by Hyde.

Maurice Moton of Bleacher Report writes usurping the AFC contest on the 17th.

“The Colts have won four of their last five games,” wrote Moton. “You don’t have a win against an opponent with a winning record, but that could soon change with the Buffalo Bills (Week 11) and the Tampa Bay Buccaneers (Week 12) on the schedule. Should Indianapolis beat one of the two championship leaders out of the race, we would have to consider this team as serious contenders. “