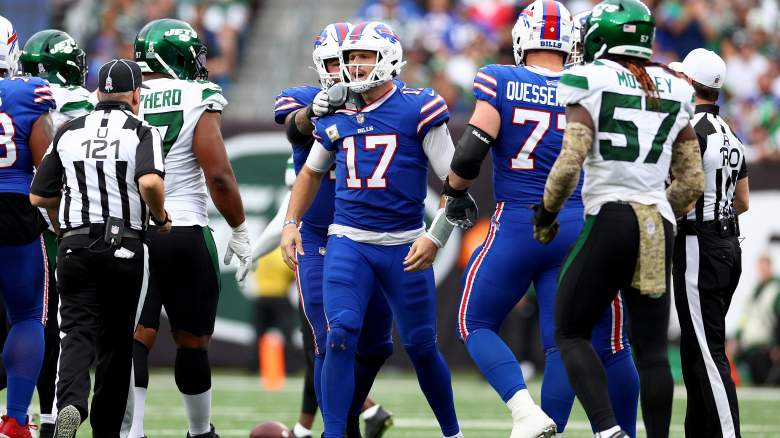 Buffalo Bills quarterback Josh Allen took a significant step forward in his recovery from an elbow injury, fully training Monday for the first time since his Week 9 injury against the New York Jets.

Allen injured his elbow in the final moments of Buffalo’s 20-17 loss and has been disabled ever since. Although Allen has been able to play in the team’s three games since his injury, he was limited in practice until his full return this week.

Though Allen was still listed on Buffalo’s injury report Monday, the team determined he was a full practice participant. Allen had been limited in the three weeks since his injury.

As WROC-TV noted in a Nov. 22 report, Allen was unable to throw in practice immediately after the injury and said he was doing his rehab one day at a time.

“I’m still working on it,” Allen said. “I just trust what our strength team says. Quite a walkthrough today so obviously no chance of contact or anything like that. I’m just trying to get comfortable without throwing it. Who knows how long it will take whether I wear one or not. We take it every day.”

Allen struggled with the loss to the Jets before suffering the injury, and his struggles continued the next week against the Minnesota Vikings when he threw two interceptions. He rebounded as the Bills went on a two-game winning streak, beating the Cleveland Browns and Detroit Lions while throwing for three touchdowns and one interception.

While Allen is getting healthier, the Bills are still grappling with a few other new and ongoing injuries. Pro Bowl linebacker Tremaine Edmunds missed each of the last two games, and rookie cornerback Christian Benford was placed on injured reserve this week after suffering an oblique injury.

The Bills will also be without edge rusher Von Miller, who injured his knee in the 28-25 Thanksgiving win over the Lions. While there were initial concerns that Miller might have suffered a cruciate ligament tear, tests revealed it was a lateral meniscus tear.

As USA Today’s Bills Wire noted, the injury is still serious and could potentially sideline Miller for the season.

“Miller and the Bills (8-3) are reportedly planning to wait up to 10 days before deciding what to do next,” the report said. “If the swelling goes down and if it is deemed possible, Miller will postpone the surgery and return to action this year.”

Miller was already eliminated from the team’s Thursday night showdown against the New England Patriots.

While Miller goes to the sidelines, the Bills could get back a pair of pass rushers as AJ Epenesa and Greg Rousseau are close to returning from ankle injuries. Both were full participants in Monday’s practice and Rousseau said he was looking forward to getting back into action.

“I just want to help my team whenever I’m ready,” Rousseau said Nov. 27 via the Buffalo News. “It’s unfortunate that Von is out for sure, but I try to be the best teammate when I go out so I can actually help the team.”