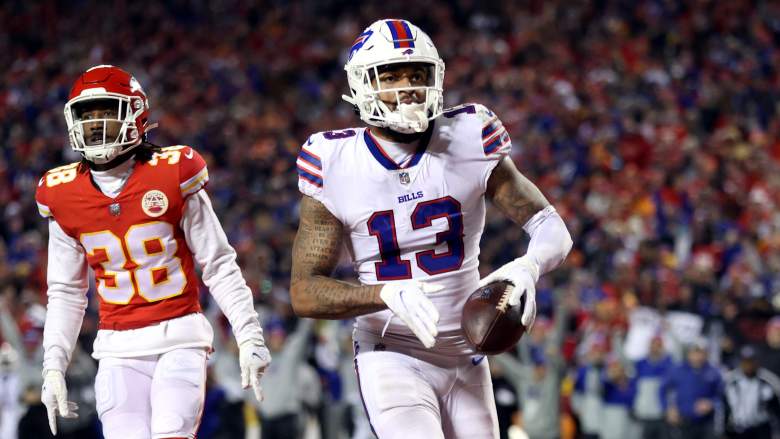 The Buffalo Bills will be without their No. 2 receiver when they take on the Tennessee Titans on Monday Night Football.

Gabe Davis was a surprise on injury reports this week, suffering an ankle injury in a non-contact play in training and was officially ruled questionable. Though there was some hope that Davis could play, the team announced he would be inactive for the game — and could face an uncertain future beyond that.

The Bills added Davis to the inactive list ahead of Monday’s game, but his fate seemed certain long before then. Almost two hours before kick-off ESPN’s Jeremy Fowler reported that Bills’ recipient was unable to recover in time for Monday night’s football match.

“WR Gabe Davis (questionable, ankle) is unlikely to play the tonight #Titans, per source. The team have had hopes but the game has been seen as an uphill battle since Saturday’s injury. Out except surprises,” he tweeted.

It probably would have been a long shot for Davis to play in the competition on Monday. NFL insider Mike Garafolo had initially opened up about Davis’ injury and hints of pessimism about his status.

“Wide receiver Gabe Davis was questionable on Bills’ injury report yesterday with an ankle problem.” said Garafolo on the NFL Network. “I was told he sprained his ankle playing a non-contact game. The Bills tell me he still has a chance to play. Sounds to me like he’s more on the dodgy side of the questionable. If you need to make a call regarding fantasy football, I would go with a contingency plan.

However, there had been signs leading up to the game that Davis might play. A video posted by WROC-TV’s Thad Brown showed Davis walking around the stadium without a visible limp.

Davis’ loss will likely come as a blow to the Bills. After a slow start to 2021, the third-year receiver took on a much bigger role on offense in the latter part of the season and in the playoffs, including his record-breaking four-touchdown performance against the Kansas City Chiefs in a division-round loss.

Davis immediately caught up in Buffalo’s 31-10 win over the Los Angeles Rams in the season opener, catching four passes for 88 yards and a touchdown.

As Jeremy Brener of SI.com’s Bills Central noted, the Bills could resort to a number of pass catchers to close the gap.

“With the Titans being skinny at cornerback, it could open up opportunities for other Bills receivers, including Isaiah McKenzie and Jamison Crowder,” Brener wrote. “McKenzie caught two passes for 19 yards and a touchdown against the Rams last week, while Crowder caught three passes for 28 yards.”

Brener added that the Bills could be looking for more pass-catching production from the backfield. Running back Zack Moss caught six passes in the season-opening win over the Rams, bested only by Stefon Diggs in that game. The Bills could also bet on rookie running back James Cook, who is considered the most talented receiver from the backfield but was limited to just three snaps in the season opener after losing a fumble on his first NFL carry.

Because Davis picked up his injury so late in the week, the team hadn’t given a long-term estimate of how many games he might miss beyond Monday.